By introducing its new Ez machine series with a new SmoothEz control, Mazak is redefining what an entry-level machine should be, as the builder envisions it. Currently, the Ez series consists of a vertical machining center (VMC) and horizontal turning centers in three chuck sizes, each with four versions. The entire series will be produced at the builder’s factory in Florence, Kentucky, where design work also was carried out. This makes them truly North American machines for the North American market, the builder says.

The Mazak VC-Ez 20 has axis travels of 41.34 inches in X, 20.08 inches in Y and 25.0 inches in Z. It is described a machine that is a strong balance of affordability and performance. Larger and smaller models are to follow.

The new VMC, designated VC-Ez 20, handles workpieces that are roughly 49 inches long, 19 inches wide and 22 inches tall. This model has a 40-taper, 12,000-rpm, 25-hp spindle and a 30-tool automatic toolchanger. This puts the machine squarely in the field of machines suitable for a high percentage of common components required by many industries. The machines in this category are the bread and butter of U.S. machining job shops.

To distinguish this machine in a crowded field, Mazak’s approach is to make a “commodity” machine more like an upper-end machine, and therefore a better buy. In a recent opinion piece, Dan Janka, Mazak’s president and CEO, points out that rather than basing buying decisions mostly on sticker price, shops should consider that a higher quality, more durable machine is more likely to be the better value, especially when the total cost of ownership across a machine’s full life cycle is taken into account. He contends that the Ez series strikes an effective balance between initial price and cost of ownership. To paraphrase his conclusion, he says that a bargain-priced machine isn’t a bargain if it lacks quality, dependability and capability and ends up costing more in upkeep and repairs over the long run.

With the new series, Mazak clearly intends to provide machines that are easy to use, maintain and install, yet still be available at an attractive price. The builder aims to hit this target by leveraging the technology and the manufacturing efficiency already developed for its machines used in demanding medical, die/mold, aerospace and automotive applications.

The builder reports making substantial new investments in its Kentucky i-Smart factory for the production of these machines so that both their capability and pricing structure are highly competitive. Although the company drew extensively on its existing expertise at the factory to plan and configure the production lines for the Ez series, the company says it is utilizing workflow and construction techniques developed especially for these machines. Mazak cites this homegrown approach as a critical factor in bringing machines to market that it feels outclass commodity machines of comparable workpiece capacity. Basing production in Kentucky, the builder says, also has the advantage of being close to the North American market for these machines and keeping the company more attuned to these customers.

The production and marketing strategy behind the Ez series hinges on four aspects. One, start with a superior platform. Two, offer well-engineered accessories and options. Three, have a CNC with the latest features and capabilities. Four, provide financing and strong support of the machine after installation.

The VC-Ez 20, which will be followed by a smaller and larger Ez models later in 2021, exemplifies this four-pronged approach.

1. Platform: All VC-Ez series machines have C-frame designs with X and Y axis motion via a moving table and saddle, with Mazak’s MX linear roller guide systems and pre-tensioned ballscrews for rigidity, accuracy and reliability. For operator convenience, table height is 41 inches from the floor. Doors are designed for accessibility by the operator or loading crane.

2. Options and accessories: Shops can choose various rotary tables, filter trays, dual probe kits, through-spindle coolant and high-pressure coolant systems. Plus, either an auger-type chip removal system or a hinge-type chip conveyor that ships affixed to the machine can be ordered to eliminate a second shipping pallet.

3. Control unit: Mazak’s new Mazatrol SmoothEz CNC provides dual 800 MHz processors, 512 MB of RAM and a 15-inch capacitive touchscreen that includes a full keyboard and can display to 60 lines of code. Within the control, EIA/G code and Mazatrol programming languages support a range of programming options directly on the machine.

4. Finance: Buyers can apply for financing online through the builder’s capitol equipment financing arm. The intent is to provide hassle-free, one-stop purchasing for small job shops, company representatives say. Machines are covered by a two-year warranty that includes parts and service handled directly by Mazak. 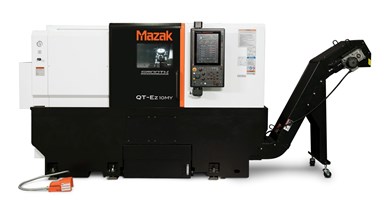 The QT-Ez series of CNC turning centers are said to give job shops and other manufacturers competitively priced access to Mazak technology and engineering expertise. The QT-Ez 10MY shown here has a 10-inch spindle and features milling and Y-axis off-centerline capability.

The horizontal turning centers in the EZ machine series are following the same formula and marketing strategy. However, out of the gate, the turning centers will be available in several sizes and configurations. Models include the QT-Ez 8, QT-Ez 10 and QT-Ez 12 each offered in two-axis, M, MY and MSY versions. M versions include milling capability, MY machines feature milling and Y-axis off-centerline capability and MSY machines are a combination of both milling and Y axis capability paired with second turning spindles for complete part processing.

Each QT-Ez model number indicates the standard chuck size, but the builder offers a smaller size optional chuck for each machine for greater spindle rpm. These include a 6-inch-chuck option for the QT-Ez 8, an 8-inch option for the QT-Ez 10 and 10-inch option for the QT-Ez 12. Each model is available in a 20-inch bed length and an optional 40-inch bed length for the QT-Ez 12 model. Choice of machine turrets include two-axis drum style, with a bolt-on or BMT55 turret for rotary tool applications Tailstocks are offered with either manual positioning with hydraulic quill or servo positioning capability. The QT-Ez series has been designed for various forms of automation from simple bar feeders and parts catchers to collaborative robot (cobot) installations. 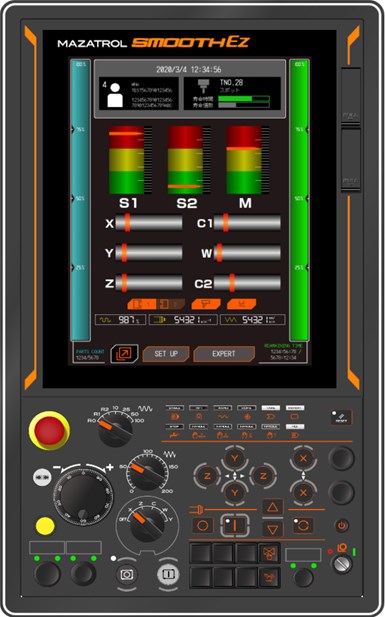 The Mazatrol SmoothEz CNC is designed as control that blends simplicity and advanced capability, making it suitable to debut on the Ez series of VMCs and turning centers, the builder says. The 15-inch touchscreen display is a notable feature.

Like the VMCs, the QT-Ez turning centers are equipped with the Mazatrol SmoothEz CNC. To expand on what has already been said about this control above as it applies to the Ez series, here are a few more important details about this generation of CNC. It has a new Launcher interface, accessible in every screen and said to provide one-touch selection to any required screen for operator navigation. To streamline programming, the control’s Quick Mazatrol function enables intuitive program creation and confirmation through touchscreen editing and confirmation of 3D models, the builder says. Other software functions include Solid Mazatrol, Virtual Machining and Cutting Adviser through Smooth CAM Ai. Centralized storage and file management through Smooth Project Manager, which bundles toolpath files, machine parameters, tool data and work offsets for downloading to the machine as a single data package. It is noteworthy that the SmoothEz CNC was developed for the requirements of the Ez machines in the North American market and is making its worldwide debut on these machines.

So how to classify the Ez Series of mills and lathes? It would be fair to say that Mazak wants them to be considered when job shops are thinking of acquiring a commodity machine tool, but the builder also wants these machines to be considered in a different class of machines tools, a class in which the balance between performance and value is strategically considered.

YouTube is still obsessed with Spider-Man: Turn Off The Dark

With Assaults on Press at Protests Increasing, US Journalists Want Better Protections  | Voice of America