A man who had to part ways with his dreams because he had to sustain his family is living them all over again.

Pabitra Sarkar is the store in charge of a factory in Siliguri. But the 43-year-old is now better known as an athlete representing India in international meets, albeit for veterans.

Sarkar had to quit football at the turn of the millennium to focus on getting a job, at a time when he was turning heads in the north Bengal club circuit as a budding left-winger.

Now, he derives maximum joy from mentoring budding footballers. For one who had spent much of his playing days with borrowed boots, Sarkar has sponsored the boots and balls of several needy children in Jalpaiguri.

From 2013, years into his professional life, Sarkar started running to “lose weight”. By 2016, he was taking part, and doing well, in domestic athletic meets for veterans. In December 2019, he finished ninth among over 40 participants in the 400-metre race at the 21st Asia Masters Athletics Championship, in Sawarak, Malaysia.

Field sports demand absolute dedication and many a dream has been shattered for financial constraints. But Sarkar’s story is special because of two reasons; life does not give everyone a second shot at a long-lost dream and among the few who get lucky, not everyone grabs the chance with both hands like Sarkar.

At 41, he finished 400 metres in one minute and 28 seconds. He has to tweak his work regimen to put in two hours of practice every morning and, sometimes, after work in the evening.

“Being back in sports gives me a purpose that no other vocation can give,” Sarkar told Metro.

Sarkar had made his mark in a string of local tournaments and earned a slot in a trial for a training camp at the Sports Authority of India’s campus in Salt Lake in 2000. He aced the trial and got a call-up from the country’s premiere sports training centre.

But his mother was dead against him pursuing a career in sports. His father, a contractual employee of a college in Jalpaiguri, died when Sarkar was four. His mother was hired at the same college as a Group-D staff five years after her husband’s death. In the meantime, she knitted woollens to run the family — including Sarkar and his younger sister.

“We need money, not medals,” his mother’s words still ring in the ears of Sarkar. The thought of “running away to Calcutta” had crossed his mind more than once. But he could not leave his family in the lurch. Sarkar remembers returning the boots borrowed for the SAI trial to a friend on a wintry morning. 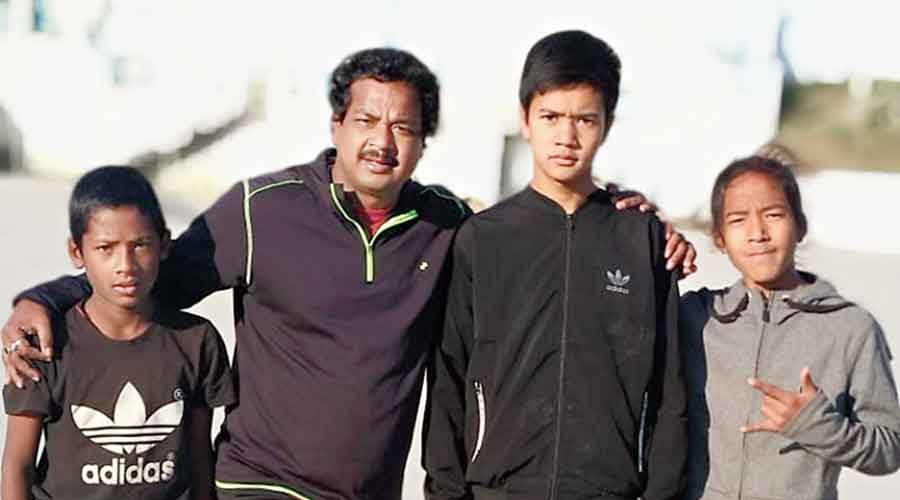 After graduation, he did a “diploma course in computer” and got a job of a “data-entry operator” at the Hindustan Coca-Cola Beverages factory in Siliguri. That was 2001.

The next decade was spent in the “9am to 8pm grind”. Sarkar, with some help from his mother, bought a plot and built a home. He got his sister married and settled down himself.

The return to sports came unexpectedly.

“I had gained a lot of weight and my fitness was on the wane. I had to do something about it. So, I started running early in the morning,” Sarkar told this newspaper.

During the course of his daily workout sessions on the local ground, Sarkar met many of his old acquaintances. An “old coach” was the first to suggest Sarkar that he should give athletics a try.

“I was back in shape within two years and took part in a veterans’ athletic meet in Calcutta in 2017. I won bronze in the 100m race,” said Sarkar. After a string of good showings in domestics meets, a fourth position in the 400m race at the national tournament in Guntoor, Andhra Pradesh, in 2018, earned him a slot in the Malaysia meet.

He was slated to take part in more international meets last year but all were stalled by the Covid-19 pandemic.

“There is no right or wrong age to resume competitive sports. Apart from preparation, there is one more thing that one needs — fire in the belly,” Arthur Cardozo, life and fitness coach based in Calcutta, said when Metro shared Sarkar’s story with him. A former state-level sprinter from Goa who had been “off sports” for a while, Cardozo is now into powerlifting. At 56, he lifts 200 kilos.

“Sarkar is quiet and unassuming. But he is a team player and never shirks from a responsibility,” said Krishna Gopal Mandal, manager of the Siliguri plant.

Sarkar now lives with his mother, wife and children, a 13-year-old daughter and a three-and-a-half-year-old boy. Once dead against his sports career, Sarkar’s mother is now “guilt-ridden” for not letting him continue football.

“But I don’t blame her. She did what she had to. I am just happy to be able to be back in the field,” said Sarkar.

More than half of theatre freelancers felt unsupported during Covid – survey