Two flatmates from East London have become an internet sensation after turning their regular trip to the local Off Licence into a competitive sport, with its own Youtube show.

Luke Robson, 26, and Dominic Richards, 26, had been school friends for 10 years before moving in together two months ago.

Like many Londoners in lockdown, the boys are missing their favourite hangout- the pub.

All of the bar crawls they had been so excited to do near their new home in Tower Hamlets were out of the question.

But when they discovered a 24/7 Off Licence directly beneath their flat on Bethnal Green Road, Luke and Dominic created a brand new way to spice up their weeknights.

For more news and features about London directly to your inbox sign up to our newsletter
here .

“We were joking around, saying, ‘I wonder how quickly we could actually get to the shop and back, and get a bottle of wine’,” said Dominic.

Dominic timed himself- at a leisurely walking pace, to start with- and was impressed to find he was at the shop in three minutes.

“The next time was just with a bit more pace to the walk,” said Luke, adding that it wasn’t until a while later that things escalated.

“So I set the timer and I was just filming him, running behind him on my phone.” 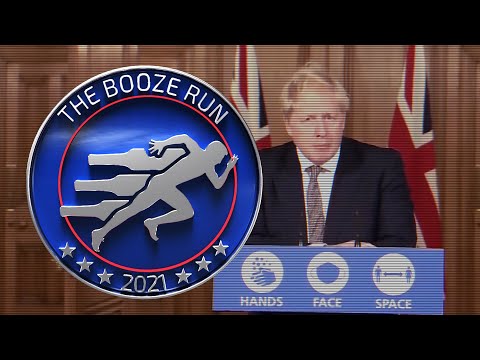 The video will auto-play soon8Cancel

Timing and filming their booze run quickly became a ritual for Luke and Dominic, as they continued to beat their previous record week on week.

Luke said: “There’s nothing else to do apart from drink alcohol and go out for exercise, and we’ve just combined the two.”

A Video Producer by trade, turning the trip to the Off Licence into a competitive game show was the obvious next step for Luke, and that’s how The Booze Run was born.

He said we “just got a little bit carried away” with the level of video production, even borrowing all the go-pros and a green screen from his office in order to up the ante.

Luke recently discovered a secret weapon to speed up his run time, which he described as “the cash payment method.”

The hack won Luke the quickest time, impressing fans of the show- although it came at a cost, as he didn’t have time to collect the change from his £10 note.

But he said it was worth it, and added: “the taste of victory is priceless.”

The pair are considering different Off Licences, different competitors and different types of alcohol as the show continues.

“We were saying we could do a crate of beer, which would be like a world’s strongest man version,” said Luke.

You will be able to catch regular episodes- the boys hope fortnightly- on The Booze Run Youtube channel, and you can also follow them on Instagram.

Do you have a story you think we should be covering? If so, get in touch by emailing anna.highfield@reachplc.com

For more news in and around London, visit the MyLondon homepage .

Kraken mailbag: Are there ROOT Sports streaming options? Will the T-birds keep Seattle in their name?

Pros and Cons of Being an Entrepreneur Vs. Working a 9-To-5

Digital Transformation Is Good. ‘YABBA’ Is Not