Psychological thriller The Gone Game was shot almost entirely from home during the lockdown; Image: The Gone Game

It was the initial days of the Covid-19 pandemic. Everything was under complete shutdown and all conventional shoots had come to a halt. As other sectors were innovating with business models and people were adjusting to work from home, the entertainment industry, too, began experimenting with the made-from-home content.

In March itself, the team at Bodhi Tree Multimedia, a Mumbai-based production house, began brainstorming. They wanted to come up with something different, but they knew the story had to be relevant-yet-practical to implement. Soon, they settled on a thriller set during the lockdown.

“It started as an experiment, so we needed to build that self-confidence on whether we could execute a project of good quality, considering the restraints,” says Mautik Tolia, CEO, Bodhi Tree Multimedia and producer of the web series The Gone Game. The team first made a trailer, then devised ways to improve on the idea, and later pitched it to the studios. The thriller, set during the pandemic, where there is more than meets the eye in the death of a coronavirus victim, was shot remotely.

Ordinarily, completing a web series of this scale would take a 100-member team and six to seven months of writing, then another couple of months in production and post production. But for The Gone Game, writing to post production was completed in two months, all with a team of just 20.

Most actors were apprehensive when first approached for the remote filmmaking process. The cast had to go through a workshop to understand the technical aspects of shooting and using cameras as they were going to work from home and would have to take care of multiple things: Set design, camera, lighting and acting. “We were suddenly the heads of all departments. You had to make sure everything was ready before the shoot,” says actor Shweta Tripathi, who plays Amara Gujral, the Covid-19 victim’s sister who believes her brother is still alive.

It was not an easy task, she adds. “I live with family, and I had to ask them all to put their phones on silent, not to watch anything on loud during the shoots—it’s not easy especially when you are stuck at home,” she says, adding that her husband shot most of the scenes for her.

Like Tripathi, the entire cast had just the director’s voice guiding them, and sometimes, a family member helping out with the shoot. “Acting is all about reacting,” says Sanjay Kapoor, who plays Rajeev Gujral, the father of the Covid-19 victim. “No matter how good you are as an actor, the other actor complements you. Here, there was no actor around me. They were doing their part and I was doing mine. For some of the selfie shots, I was looking at myself act, which is very unnerving,” recalls Kapoor, adding that he had to ‘bribe’ his 15-year-old son to help out with some shots. For some other shots in the bedroom, he remembers how Nikhil [Nagesh Bhat, director] would ask him to make the room messier. “And my wife would look at it and say, ‘Why don’t you pick up the clothes from the chair? It looks so bad’,” he says laughing.

Writing of the shows is typically a standalone process; however, since the actors could not be in the same frame, storyboarding had to continue all through. “Since the team was very lean, everyone was involved in all the processes from the very beginning. The director and DOP (director of photography) had to understand how scenes would be shot from the first stage since reshooting was not a luxury they had,” says Tolia.

For OTT platform Voot Select, on which the show is now airing, it was a risk to buy-in. “But we saw the trailer and read the script, and were confident it would work,” says Ferzad Palia, head–Voot Select, Youth, Music and English Entertainment, Viacom18, the parent company of Voot. “From day one, we knew we were not making a lockdown show, but a show which is set during the lockdown. If we were to produce the series today, with some things opened up, it may not have been very different, except there would be a set and more cameras involved.” 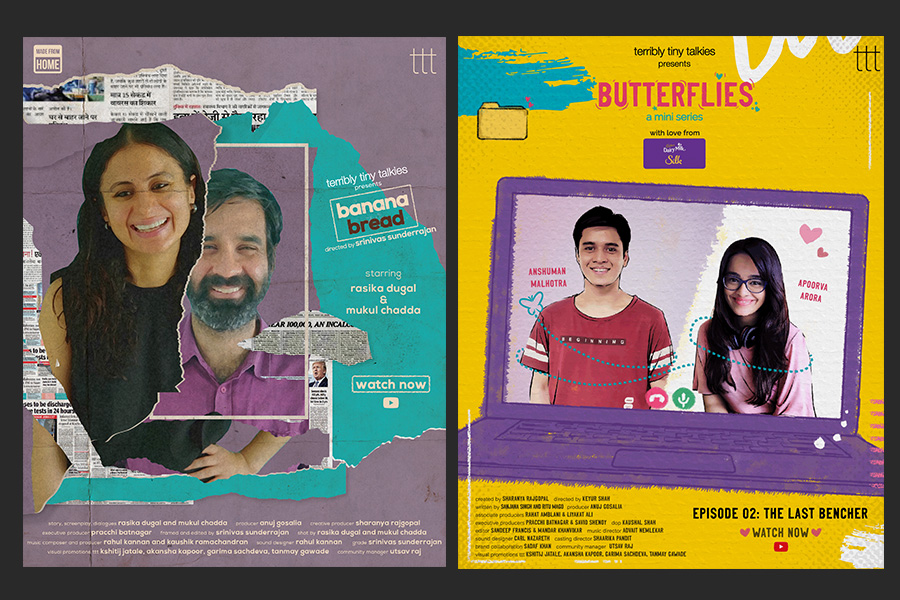 Terribly Tiny Tales (TTT) released two short films—Half of My Heart and Banana Bread—in June. Both were shot at home by the actors with the directors on call. The production time went up as two or three people had to do all the work compared to 30 to 40 individuals in case of a regular shoot; Butterflies, another offering from TTT; Image:  Terribly Tiny Talkies

TTT or Terribly Tiny Tales is another platform that worked towards creating stories despite the multiple restrictions that came with the lockdown. “Our aim was to create interesting storylines and not be bogged down by the perils of the pandemic,” says Sharanya Rajgopal, TTT studio head. For the micro-fiction platform, the year began with successful releases, but the pandemic made it hit the pause button for many projects. “Initially, with two successful movies back to back, we thought this year is going to be incredible. We were telling the stories we wanted to, and brands were paying attention to us. It was in March that we realised that the pandemic will severely impact us, so we all decided to start working remotely,” adds Rajgopal.

TTT released two short films—Half of My Heart and Banana Bread—in June, both shot at home by the actors with the directors on call. “It was a learning experience… I realised that being on call has its limitations and that I need to be precise and articulate to make the actors understand exactly how a scene needs to be shot,” says Keyur Shah, director of Half of My Heart.

“Where earlier we used to have 30 to 40 people involved in the shooting, these movies had two to three people doing all the work in a home setting. So the total production time went up,” adds Shah, who also directed the music video for the song ‘Fursat Hai Aaj Bhi’ by Arjun Kanungo. The video, also shot remotely, released in June. “A scene for that song took us four days to shoot which could have easily been done in a day on set,” he adds.

Rajgopal, who is also the writer of Half of My Heart, says, “It was a simple idea, and all of us used to connect on Google Meet for pre-production, shooting and post production. It was an exhilarating experience.” With the success of remote filmmaking for Half of My Heart, the team decided to shoot Banana Bread in a similar manner. Remote working also meant they had to be extra clear on what they wanted to do. “For these movies, the pre-production time went up… everything was done on paper remotely. We realised that having a strong script is very important. A clear vision is very important while shooting remotely,” adds Rajgopal. 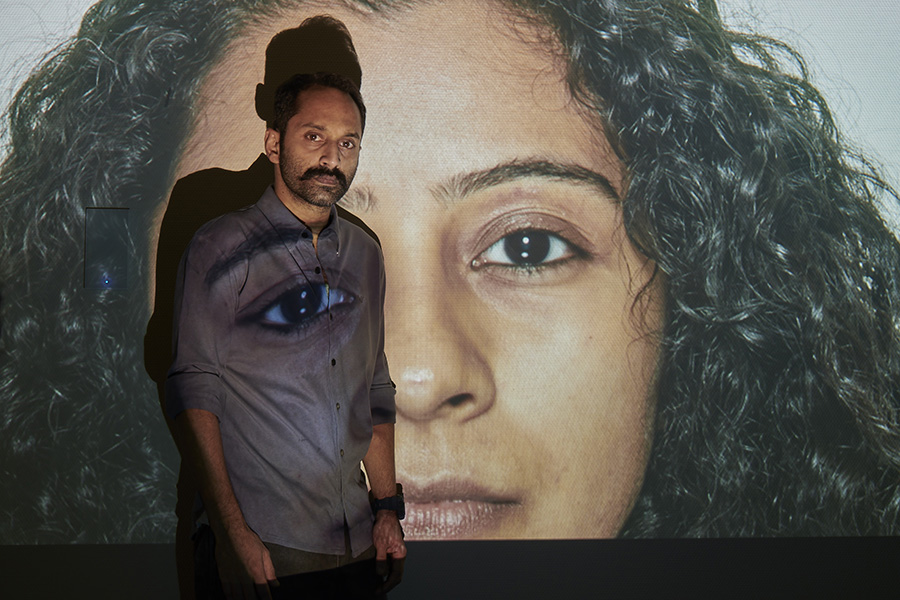 While many production houses were experimenting with remote filmmaking formats where the actors shoot the film while being directed on call, actor Fahadh Faazil and filmmaker Mahesh Narayanan decided to change things for their experimental Malayalam film C U Soon. The filmmakers decided to work on a screen-based film—where the characters only interact with each other through computer and mobile screens. Considering the film was a thriller with strong emotional undertones, the duo wanted to ensure actors could react to one another during takes. As a solution, the team created a mini “bio-bubble” by renting out six apartments in Faazil’s building for all the crew members.

“Since the filming happened during the initial days of the lockdown, the only possible solution for executing this film was to assemble the entire cast and crew under a single roof,” says Narayanan. While the pre-production was going on, the crew isolated themselves in their “new accommodation” for a couple of days. The maximum number of people who worked on the film in a day was 42, keeping in mind the 50 people limit at the time.

“The process was very different,” recollects actor Darshana Rajendran, “there were no conventional camera angles while shooting, so we had to do entire scenes together without cuts.” Though all the actors were in close vicinity, given the format of the film, no two actors could appear on the same screen. “Another challenge was that for all the video call conversations, I never performed the scenes looking at my co-actors. I was mostly looking at a blank screen and imagining them there,” she adds. There was no scope of reacting to a co-actor while looking at him or her given the restrictions of the format. “However,” she says, “we were fortunate that all actors were around for all scenes, so while my part of the video call was being shot, I had Roshan [Mathew] or Fahadh hiding somewhere in the room and giving me cues.”

The film was released on Amazon Prime Video in September. “When Mahesh and Fahadh, both great artistes and brilliant collaborators, first shared the story with us, we were taken in by the riveting storyline and the ambition in its execution. We shared their excitement and I think Mahesh and Fahadh did an admirable job of taking on a unique-yet-relatable story to create something new and relevant at its time of release,” says Vijay Subramaniam, director and head, content, Amazon Prime Video India.

Despite the constraints of the pandemic, filmmakers managed to come up with relevant stories and creative ways to shoot them. And though shooting will eventually return to sets, Shah believes remote pre- and post-production are here to stay. ”The pre- and post-production will be done online. This combination of shooting on set and online production process will save resources and time in the long run,” he says.

Rajgopal agrees, “A large part of the movie-making process will stay online. It will be a new world lens that we will look at for every story from now on. If you write a film set in 2021, there is no way you can ignore the impact of this humanitarian crisis… it’s going to creep into the stories, the narrative will reflect the impact of everything we have suffered. So I feel most movies will have work done remotely and in a more responsible way.”

Click here to see Forbes India’s comprehensive coverage on the Covid-19 situation and its impact on life, business and the economy​