By Wolf Richter for WOLF STREET.

Ecommerce retail sales jumped 37% in the third quarter, compared to a year ago, to $210 billion (seasonally adjusted),  after skyrocketing 44% in the lockdown-inspired second quarter, according to the Commerce Department today.

During the panic of the Financial Crisis, ecommerce sales experienced three quarters with year-over-year declines, as total retail sales plunged. But not during the Pandemic – the Weirdest Economy Ever – when retail sales rocket to new highs, powered by the explosion in ecommerce sales: 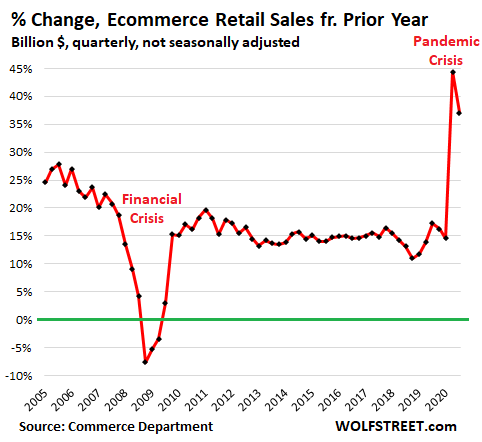 Ecommerce includes the online sales of all retailers, including Walmart, Costco, Target, and Macy’s, when these sales are initiated and paid for online, regardless of how the merchandise gets into the house, either through delivery or some sort of customer pick-up at the store.

Walmart reported this week that  in the quarter ended October 31, ecommerce sales at Walmart U.S. soared by 79% year-over-year and at Sam’s Club by 41%, even as traffic in its brick-and-mortar stores declined, with people making fewer trips and shifting more of their spending online. Target reported a blistering 155% gain in its ecommerce sales in the third quarter. Not all retailers hit it out of the ballpark in ecommerce, but many did.

Ecommerce sales accounted for 14.3% of total retail sales in Q3, after having hit 16.1% during the lockdowns in Q2, up from what was the prior record of 11.8% in Q1, having compressed the market-share gains of several years into two quarters: 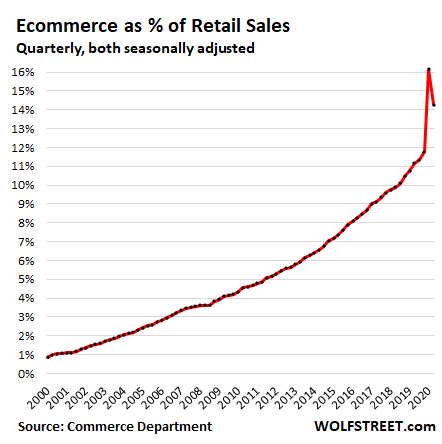 Total retail sales include a lot of things that are online-resistant, such as gasoline sales and new vehicle sales (franchised dealers are somewhat protected by state franchise laws), Tesla being an exception since it doesn’t have dealers. But used vehicles are now being sold online in larger numbers.

The Census Bureau began an “experimental” data series last year about some of the sub-categories of ecommerce sales. The data only goes back to Q1 2019, and is not seasonally adjusted, but it shows some interesting dynamics.

Online food-and-beverage sales in Q2 had shot up by 100% from Q1 and by 220% year-over-year, to $7.1 billion. In Q3, people started going to grocery stores a little more and backed off just a tad from buying this stuff online, but online sales of food and beverages in Q3 were still up 160% year-over-year: 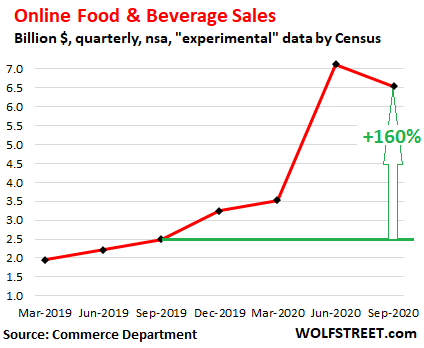 Online sales of furniture and home furnishings had jumped 61% year-over-year in Q2. In Q3, these sales dipped to $4.1 billion, but were still up 49% year-over-year: 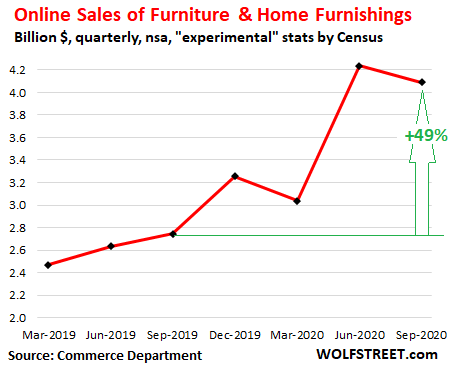 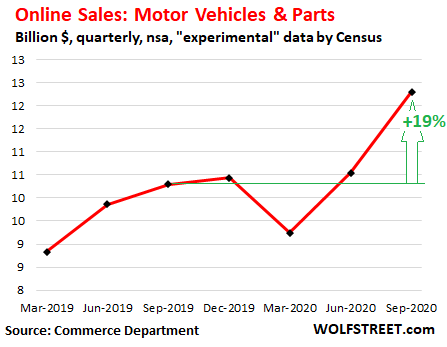 Online sales of building materials, garden equipment and supplies, in Q3 dipped to $6.8 billion – after the huge spike in Q2 – but were still up 70% year-over-year: 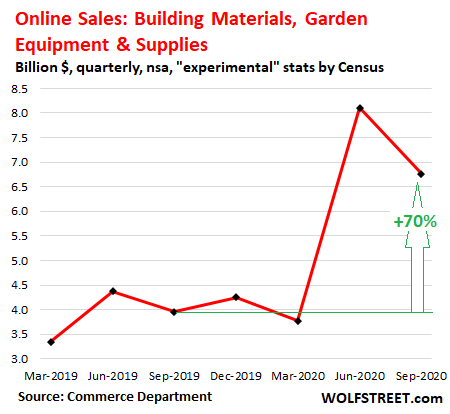 Online sales of clothing and accessories include work-related clothing that suddenly, due to work-at-home or no-work-at-all, took a hit. And the category includes things like party dresses for which there was suddenly less need. But other categories thrived, and so this is a mixed picture, where sales had hit a high in Q4 2019, and as expected seasonally, dropped sharply in Q1, but then didn’t explode higher in Q2 and Q3 but followed what looks like normal seasonality. Nevertheless, year-over-year, online clothing sales were up 56% in Q2 and 33% in Q3. Those are still huge gains: 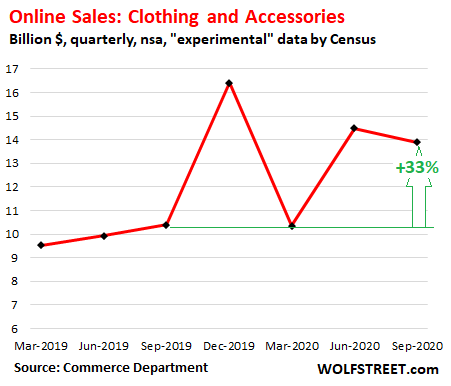 Earlier this week, the Census Bureau reported monthly “advance” retail sales by category of brick-and-mortar retailers for October. It includes a metric for “non-store retailers,” which partially overlaps with ecommerce but also covers other vendors, such as market stalls, door-to-door sales, vending machines, and mail-order houses. And in October, after dipping and wobbling in the prior three months, sales at these non-store retailers rose by 3% from the prior month to a new record.

The explosive burst of ecommerce in Q2 that had tangled up the supply chains and delivery systems in the US is unlikely to be repeated in Q4. But the new restrictions being phased in across the country, and the new concerns causing people to think twice about heading to the mall – the diminishing number of people still wanting to go to the diminished number of stores still operating at the malls – are going to add fuel to ecommerce sales.

And the seasonality of holiday-sales, amid the new-normal of this shift to ecommerce, should produce another blow-out quarter for ecommerce and a further market-share grab from brick-and-mortar stores, to finish off a year that compressed three years of ecommerce gains into one.

Enjoy reading WOLF STREET and want to support it? Using ad blockers – I totally get why – but want to support the site? You can donate. I appreciate it immensely. Click on the beer and iced-tea mug to find out how:

Would you like to be notified via email when WOLF STREET publishes a new article? Sign up here.