WASHINGTON — U.S. consumers increased their spending by 1.4% in September, a modest gain but far less than the big increases of late spring, adding to concerns that Americans remain cautious with the viral pandemic resurging across the country and impeding the economy.

The September gain marked the fifth-straight monthly increase in consumer spending, the primary driver of the U.S. economy, since the virus broke out in early spring and flattened the economy. But the recent slight increases reflect an economy weakened by the virus and by the failure of Congress to provide another stimulus package to struggling individuals and businesses.

Friday’s report from the Commerce Department also showed that income, which provides the fuel for spending, rose 0.9% in September. That moderate gain followed a sizable drop of 2.5% in incomes in August.

The economy would weaken if consumers, who drive roughly two-thirds of economic activity, start cutting back on spending now that confirmed coronavirus cases are accelerating and the stimulus aid that Congress enacted in the spring for businesses, individuals and laid-off workers has expired.

The 0.9% rise in incomes reflected strength in the key component of wages and salaries, gains that reflect continuing employment increases as the labor market climbs back after 22 million jobs were lost in March and April.

Gregory Daco, chief economist at Oxford Economics, said that after an initial burst in spending as the first wave of lockdowns were ending, the prospect for spending going forward is “much grimmer.”

“In the absence of a fiscal stimulus package, slower employment gains will be insufficient to prevent incomes from falling below pre-covid levels,” he wrote in a research note.

The September report showed that consumer spending on durable goods such as autos shot up 3% in September. Spending on nondurable goods, like food and clothing, rose by a smaller 1.5%.

By contrast, spending on services increased a modest 1%.

Since the pandemic struck, Americans have been spending freely on goods — from cars and clothing to furniture and sporting goods — while cutting back sharply on purchases in the service sector.

Services, which make up the bulk of the economy, include everything from bars, hotels and restaurants to airlines, hair salons and movie theaters. The service industry and its employees have been hit hard by people’s reluctance or inability to shop, travel, dine out or attend entertainment events as they formerly did, a trend that is hampering the overall economy.

On Thursday, the government estimated that the economy, as measured by the gross domestic product, surged by a record-shattering 33.1% annual rate in the July-September quarter. That increase followed a record 31.4% annual plunge in the previous quarter, and it still left economic output about one-third below the peak it reached in the fourth quarter last year.

The third quarter rebound was led by a record 40.7% increase in consumer spending in the third quarter. But economists worry that this surge will not be sustained in the final three months of this year.

Economists generally foresee annual gross domestic product growth of around 5% in the current fourth quarter. But they warn that unless Congress can reach agreement on a new aid package for jobless Americans and small businesses struggling to survive, the economy could suffer a reversal early next year.

The spending and income report showed that inflation, as measured by the Federal Reserve’s preferred gauge, was 0.2% in September and 1.4% over the past 12 months. Though that is up slightly from the 12-month gain of 1.3% in September, it remained well below the Fed’s 2% target for inflation.

The Fed will hold its latest policy meeting next week. The policymakers are widely expected to keep their benchmark short-term rate at a record low near zero in hopes of helping the economy emerge from the pandemic-induced recession. 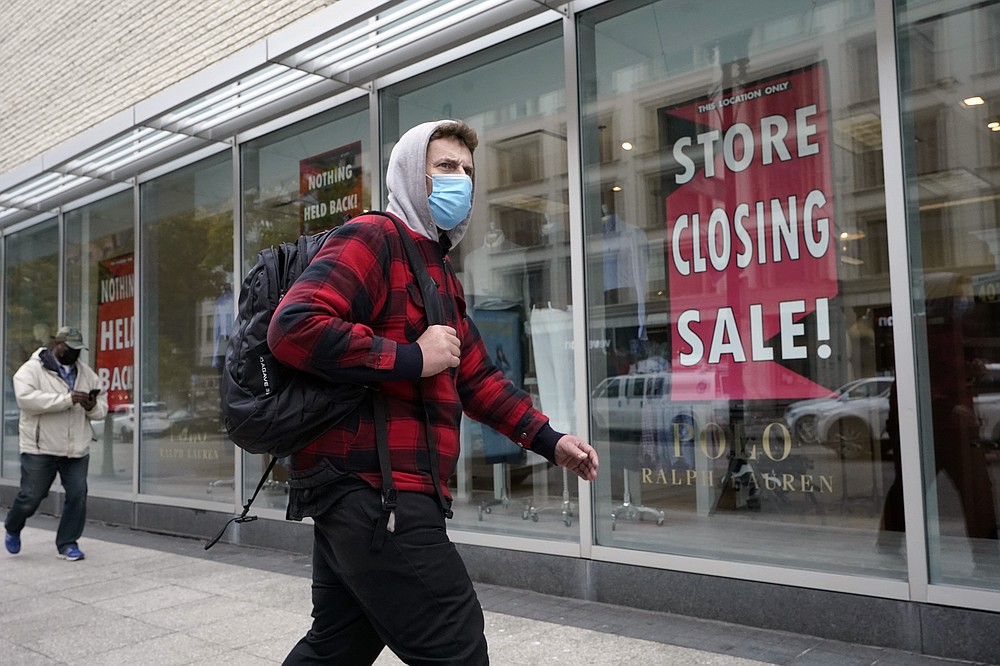 A passer-by walks past a store closing sign, right, in the window of a department store, Tuesday, Oct. 27, 2020, in Boston. Americans may feel whiplashed by a report Thursday, Oct. 29, on the economy’s growth this summer, when an explosive rebound followed an epic collapse. The government will likely estimate that the economy grew faster on an annualized basis last quarter than in any such period since record-keeping began in 1947.(AP Photo/Steven Senne)

Coronavirus: The dysfunctional marriage between government and teachers