Quality hospital care boils down to the skill and dedication of doctors and nurses, but to an increasing degree, their abilities are being enhanced by new technologies.

Shanghai Chest Hospital, China’s leading hospital in the treatment of thoracic diseases, has been a pioneer in applying “smart” technologies to medicine.

Here’s how it’s working out.

Applying artificial intelligence to coronary computed tomography (CT) angiography scans last May, the hospital has conducted examinations of about 10,000 patients.

It’s a non-invasive method to get images of vessels that supply oxygen-rich blood to heart muscles, enabling doctors to spot clogged arteries.

The scanning method it replaced could be painful for some patients and a long process for doctors. To capture a still image of the heart, patients were asked to hold their breath for more than 10 seconds. They had to take medication to stay calm and keep their heart rates at 70 or below. After scanning, it took half an hour to process the scan images.

“The heart is a beating organ, which makes it hard to capture its image,” said Jiang. “It was like taking a photo of something in motion, which is demanding.”

With artificial intelligence technology, doctors can verify results from one heartbeat, and a 3D image is produced within five minutes.

Whereas once, only about 10 patients could be scanned in an afternoon in the past, the new technology enables scans for 20 to 30 patients, shortening the time it takes for people to get an appointment. Radiation exposure is reduced by 80 percent.

Cardiovascular disease is the leading cause of death in China, with some 290 million people currently diagnosed with it.

“We are thinking about promoting this technology for use in normal health checks so that patients with family history of cardiovascular disease or high-risk groups can be diagnosed early,” said Jiang. 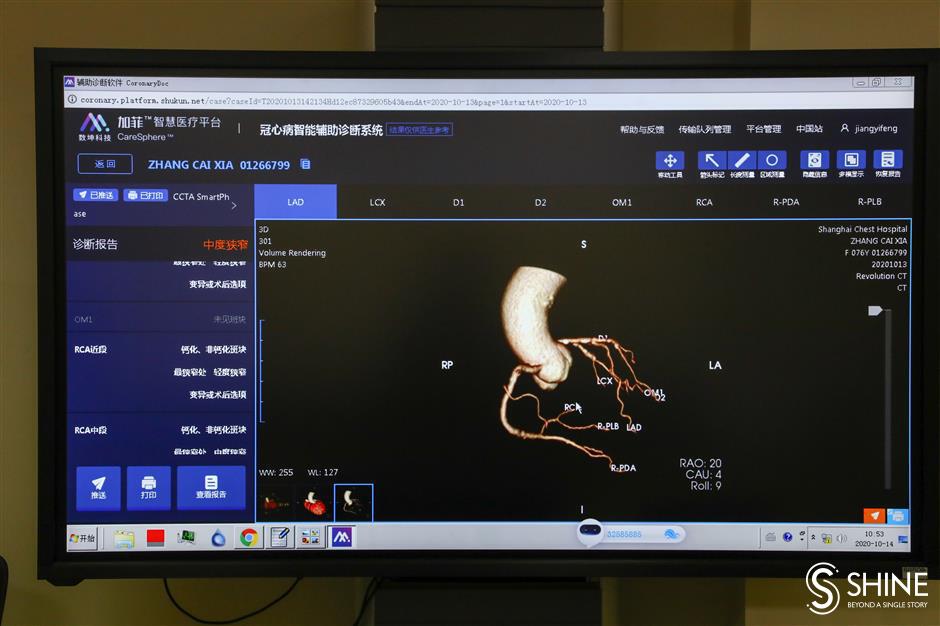 Dr Jiang Yifeng, vice director of the hospital’s radiology department, exhibits the AI-assisted coronary CT system, which can produce a 3D image of hearts within five minutes after scanning.

The hospital was also the first to adopt artificial intelligence in CT scans of the lungs back in 2017, doubling the daily number of screenings to 1,000. Scans have been done on about 550,000 patients in the past three years.

Dr Yu Hong, director of Shanghai Chest Hospital’s radiology department, said artificial intelligence is like a puppy that can be trained.

“We have passed our experience and knowledge to artificial intelligence using algorithms and data engineers,” said Yu.

She said the rate of accuracy has been increased to 70 percent from 30 percent or lower.

The technology hasn’t been widely adopted by health checkup centers, she added, because of their limited number of patients. 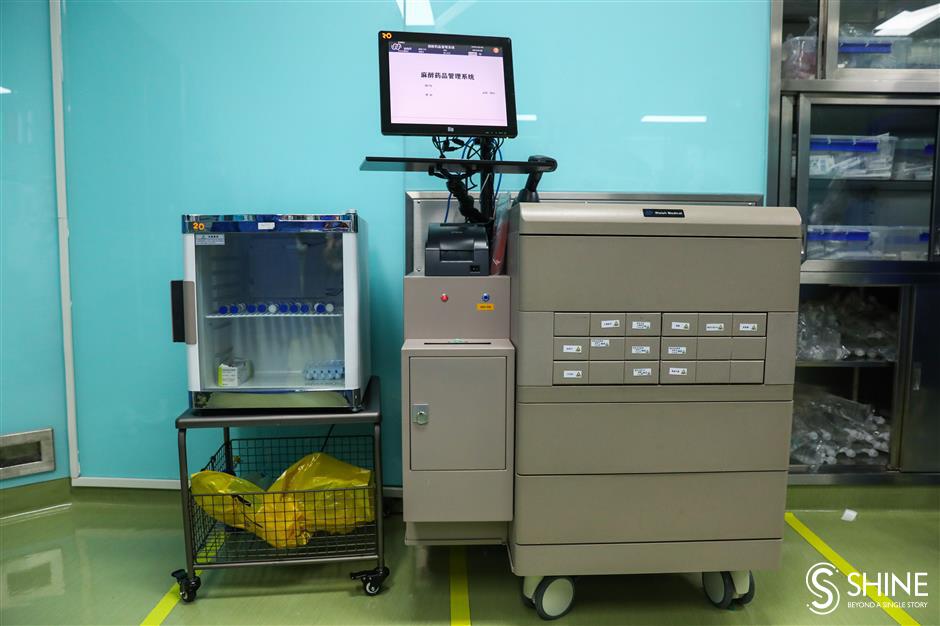 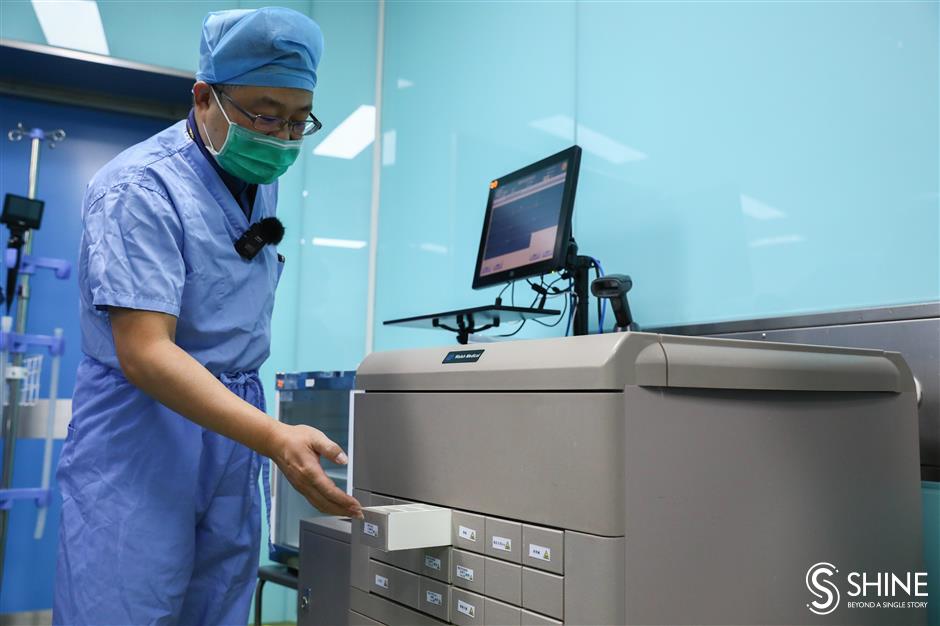 Operating rooms usually require large quantities of controlled drugs. In the past, it was the task of already busy doctors to record the doses they used during surgeries.

Using a fingerprint scan system to log in, doctors can get the exact dose they need from the carts, which automatically record the dosages.

“The machine can respond to different needs and record all the data,” said Dr Gu Jiaqin, who works in the hospital pharmacy. “Doctors get what they require, and we pharmacists can see what has been used and refill the carts.”

Smart carts have been in use for two years and now serve 22 operating rooms.

“Sometimes doctors have to do five surgeries a day, making it hard to find the time to record dosages,” said Gu. “This new system lets them focus more squarely on the operations.” 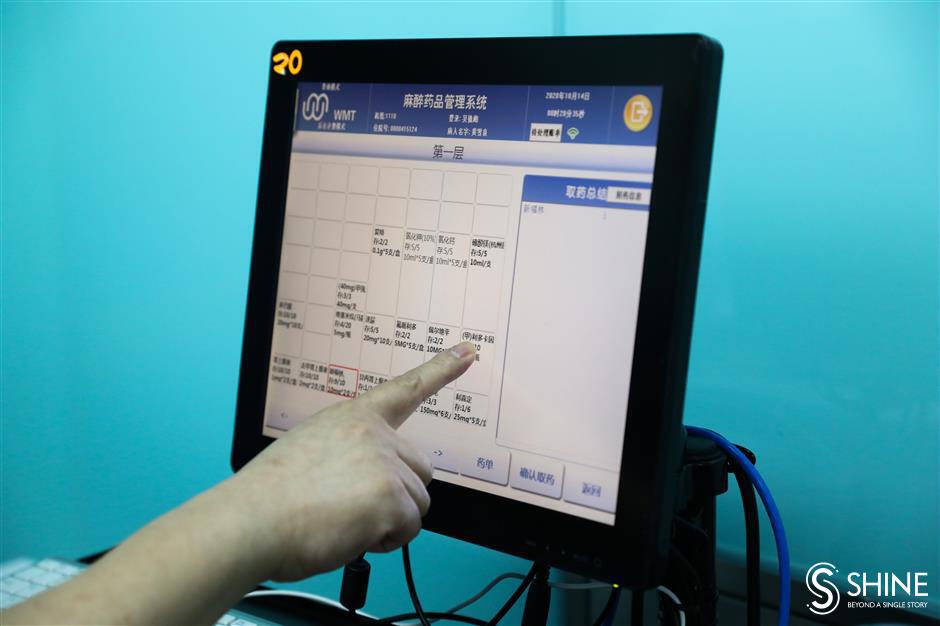 Doctors can check the exact dose they need for surgeries from the smart cart after logging in via fingerprint. 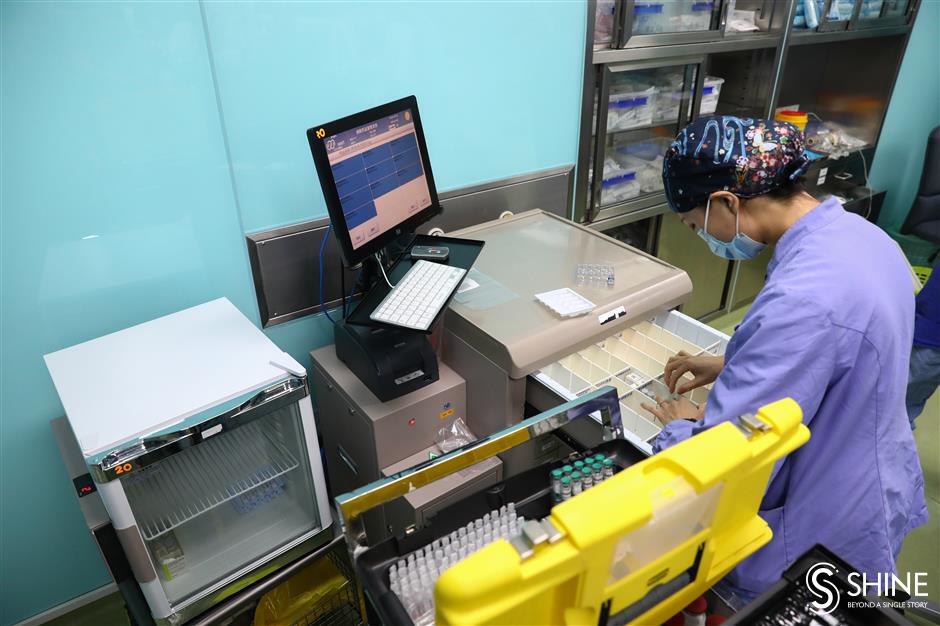 A pharmacist refills the intelligent medication cart after operation.

Shanghai Chest Hospital conducts some 10,000 cardiothoracic surgeries each year, the most of any hospital in China. It also ranks first in the world in the number of surgeries on lung and esophageal cancers.

In that realm, the hospital has performed more than 600 robot-assisted operations, called “da Vinci surgery.” The new technology has meant a lower level of invasive surgery and faster recuperation times.

Dr Li Zhigang, director of the hospital’s department of esophageal surgery, said that the technology is especially beneficial in tricky operations performed within limited spaces of the body, like esophageal surgery.

During operations, doctors manipulate a robotic arm via computer to remove a tumor and dissect lymph nodes. Doctors really appreciate the aesthetic quality of surgery they can provide, Li said.

“A successful operation assisted by a robot with precise control is almost artistic,” he said.

The hospital plans to expand the use of robots in the future.

“It’s like something out of scientific fiction movies,” Li said. “More intelligent technology will be devised to fulfill human needs. High-precision robotic arms are just the beginning, both inside and outside the medical field.” 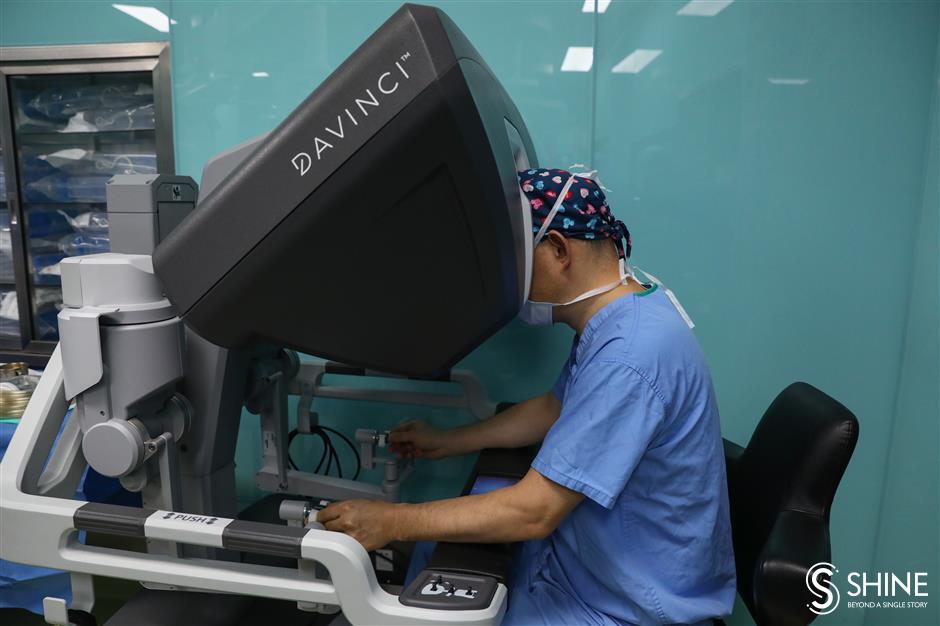 Dr Li Zhigang, director of the hospital’s department of esophageal surgery, operates the da Vinci computer system to manipulate the robotic arm during a surgery.