What does it mean to be a creative in lockdown? What can we learn about our practice and our industry? I spoke to theatre designers about their experiences of recent months and how they see the future evolving. 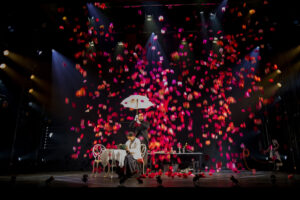 Rather than coming to a standstill creatively, many feel it has been an opportunity to re-envisage, recreate, or maybe just re-energise from months of non-stop freelancing.

The initial relief about the government’s  £1.57bn fund for the arts has started to dissipate. Some companies have been reached, but for many there is no access to grants and still no work.

The Stage argued for support beyond the theatre building, pointing out that freelancers “will be left stranded come August… many of whom have already slipped through the cracks in the government’s support schemes”. In an industry where 70% are freelancers, how is this affecting those at the most precarious end of the industry?

A time for activism

Roisin Martindale is a Bectu member. She has seen lockdown as a positive time for activism within the design community. She co-founded the Whitecard Collective (https://twitter.com/whitecardc; instagram @whitecard_collective) with her friend Alana Ashley and others to “represent our [graduate] interests in the discussions that are going on”.

The account is a place to share photos of cancelled and suspended work, of the ghostly but painstakingly accurate white card models designers have created for shows, many of which will never get made.

For Roisin larger support groups, although great, were hard to relate to for new designers like herself. “In Zoom meetings, graduate designers were not being represented… there is a creative block [for people] who have recently graduated.” To address this, the group is working with Bectu sister union Equity to set up workshops in puppetry and Sketchup, to widen participation and help designers sharpen their skills, explains Roisin.

“We’ve also been getting involved in other groups, to think about what designers can bring. For example we’ve approached online festivals and said ‘you could be employing designers here, or commissioning theoretical artwork’ – something many producers had not considered.”

Bectu has also been organising online training, webinars and workshops during the pandemic where members can develop their skills and creativity.

One of the largest industry groups to spring up over lockdown is the collective #scenechange, which includes big-name designers Vicki Mortimer, Katrina Lindsay and Tom Piper.

Although more relevant to established designers, anyone can join the discussion forum and actions, offering a rare opportunity to cut across the hierarchy.

The group staged an intervention last month, wrapping theatres across the UK in recyclable tape, emblazoned with the words “Missing Live Theatre” in pink. These protest wrappings are still on theatre buildings across the UK.

The gathering of action groups within the industry, while encouraging for some, has not felt useful to all.

Designers are suffering from anxiety about their future and current funds, not to mention Zoom fatigue.

“All these Zoom conversations – it’s really stressful,” designer Grace Venning points out, while acknowledging the “group therapy side to it”. Grace describes a kind of stasis caused by “the unpredictability [of the rules]. I didn’t want to get emotionally invested in a plan [or project]  that could then change,” she explains. “It can feel too risky at this point.”

Since freelancers often work ahead of pay and without proper contracts, every job is high risk at the best of times.

Roisin Martindale, who graduated from Bristol Old Vic in 2019, has been able to stay in London and develop some areas of her practice but says “it has still been incredibly stressful to organise within my first year as a freelance professional”.

In what is often a faced-paced and intense industry, some have welcomed the opportunity to recoup. But for designers a day off is never a day off.

Anna Yates, an Australian designer who studied in New York, says: “I’ve started baking everything from Kim-Joy’s cookbook…  I just love the idea of all the little edible things being little animals.”

Grace Venning says: “I’ve learned how to do embroidery… I’ve been cooking, I want to get back into dress-making.”

For Roisin, lockdown has meant more time with her partner, and getting involved in activism for trans and non-binary people’s rights.

The shock to the industry has been hard to take in, and for such a busy and committed workforce to find themselves suddenly unable to work is frustrating.

“I want to earn money and do something fulfilling and enjoyable,” Grace explains of her new job in an art gallery – while feeling like committing to “a new way of life” is almost a betrayal of the theatre world.

But she has to be practical about earning money in the coming months, when only current projects will have a chance of progressing, and many will not make it.

Everyone emphasises the lack of clarity. “I feel like I’m waiting to figure out what’s going to happen with theatre,” says Grace.

She has just has booked onto a #scenechange Zoom discussion at the time of our interview, perhaps as a way to feel more connected. “I need to get my head out of the sand and actually hear about what people are saying, partly because I think those people that have been in the industry a long time…  maybe have more of an idea of the financial situation.”

Anna works most of the time as a full time assistant for an established London designer. She feels that designers early in their careers struggle to get information, in part due to the structure of the industry.

She has felt in the dark about what is happening and where her next day’s work is coming from, and it has been an emotional time.

She needs three days’ work a week on top of the government support money to survive, she says. She has received furlough money, but an unavoidable combination of freelance and PAYE means only about 60% of her usual income. Since 60% of income is the cost of rent for many Londoners, this is clearly insufficient.

Anna has managed to fill the gaps with work so far but “I’m coasting… I’d just finished a project with Michael Levine when lockdown started… I’m also working on an opera with Opera North.” Furthermore, the effects on the theatre industry look set to be  a lot more long term.

The government’s Self-Employment Income Support Scheme has not been accessible to many early-career designers, including Roisin. “The lack of support offered so far to the theatre and entertainment industries is terrifying. I fear what type of industry I’ll be returning to in the future,” she says.

So what does the future look like? Roisin has been enhancing her digital skills and project knowledge. She has a vision for online performance beyond the recorded plays that we are seeing televised at the moment. “I think people are still playing around with online performance,” she says enigmatically.

What makes live performance so special – being together in a shared space, living an experience – may be curtailed by lockdown, but when we are allowed into these spaces, our experiences may be even more powerful, she suggests. ‘”Of course our sensitivities, what we feel like, is going to change. Maybe we’ll be more sensitive to being in the same room all together.”

So is a creative industry, so full of new ways to reinvent itself, better off without too much government involvement?

Anna is not convinced. “It’s not like the arts flourish when there’s less money – in any way,” she emphasises. “The bigger theatres need to do what some [like the Royal Court] are already doing so well – supporting quality work on all levels of the industry and expanding outreach, as well as new writing.”

The arts were already “woefully underfunded” by the government before this crisis, says Grace.  “First the lack of government funding  was already an issue, and it could probably get worse. And second, even if the theatres could survive on their own income alone, which they can’t, we might have to have socially distant audiences and people might be too scared to go into crowded spaces.”

Anna hopes it will make things more fluid for designers, cutting across hierarchies and making it easier to cross over into other roles.

Grace sees an opportunity for radical changes to existing structures. “Maybe we need to start from the ground up again. The changes don’t have to be dramatic, but for a lot of practitioners they are frustrated with lack of access. For women designers who want children there is virtually no support, there are also very few BAME designers in the industry.”

She also sees a less London-centric future as more people work from home, for example those with children.

“I’m working with a director who lives on a farm in Yorkshire. He has cerebral palsy and uses a wheelchair. It’s going to be so much easier for him if people are willing to have video calls. In theatre there is the idea that if you don’t live in London you should make the effort to come for job interviews. A lot of theatre relies on those chats.”

Why the theatre industry has become so stratified and precarious is perhaps a question that requires more space, but it’s certainly difficult to unionise when one job role can look so different from the next.

I have been a Bectu member since 2014 when I started working at Picturehouse part-time to support my theatre design work. Bectu was instrumental in supporting the cinema workers’ campaign for better wages, and helping achieve an unprecedented win in a court case for unfair dismissal, after retaliation from the international cinema chain.

Many of the staff there are also artists and freelancers, and their experience with Bectu has helped them demand rights in their freelance work.

Bectu represents and negotiates collectively for thousands of creative freelancers, including stage and costume designers, and recognises how even more exposed and precarious the working lives of people who work in the arts have become in the light of the pandemic.

The campaign for a New Deal for Freelancers and precarious workers aims to work with the wider industry to ensure things change so people are never left in this situation again.

Anna, who studied in New York, highlights workers who formed a mini-union to negotiate contract rights on Broadway. She believes fixed contracts are not ideal but should not narrow opportunities or restrict participation. “There’s been a lot of talk about Universal Basic Income and working four days a week.”

Grace was inspired to join Equity after taking part in a discussion with a directors’ and designers’ group to try to figure out how to get properly paid for work that can be nebulous in terms of the time it takes.

Due to the long design periods of larger productions, well established designers may be able to continue through these next months until those surviving theatres are up and running.

Perhaps our younger freelancers and assistant designers will still be designing theatre but some may drift into film and TV work. Many may refuse to be overworked and underpaid any more.

It will be a tragedy if our graduate designers leave now or never make it into the industry because they cannot manage financially, or are put off by the conditions, the lack of positive discrimination, and lack of maternity pay. Until these things change, we are all “Missing live theatre”.

10 Tips for Adjusting to a Post-COVID Business World

Kraken mailbag: Are there ROOT Sports streaming options? Will the T-birds keep Seattle in their name?

Pros and Cons of Being an Entrepreneur Vs. Working a 9-To-5