MANILA, Philippines — For most of his term, President Rodrigo Duterte has almost completely left economic matters to his economic team. It was rare to hear the President talk about the state of our economy during public speeches he, most of the time, dedicate to his controversial drugs more, and more recently, to police and military-centric quarantine controls.

But this year’s State of the Nation Address (SONA) may prove to be entirely different. Palace officials said Duterte would unveil a much-awaited recovery program from the pandemic on his speech, details of which have been anticipated by observers and investors, some of whom have criticized the administration’s outbreak response so far as severely wanting.

The focus on the economy on this year’s SONA, if indeed will happen, also speaks of how economic hardships of the Filipino tends to reverbrate to the overall political landscape. Previous presidents like Gloria Macapagal-Arroyo suffered political backlash for a lackluster economy on the second half of her term. Similarly, as the honeymoon period of Duterte wanes, many believe the pandemic may have finally dented his ‘Teflon’ popularity, one that has proven elastic enough to survive a protracted rehabilitation in Marawi City and an inflation surge in 2018.

Hours before Duterte delivers his penultimate SONA, we look back at some of economic data that would clearly show where we are, what the Duterte administration achieved, and where plans have failed over the past four years. At the center of his economic policy, Duterte promised Filipinos a “comfortable life for all,” a goal heavily disrupted by the coronavirus disease-2019 (COVID-19) pandemic. But even before the outbreak struck, and the government preoccupied with handling the health crisis, he made several promises: from a new telco player whose entry to the market has since been delayed, a China-friendly foreign policy that will turn into economic benefits, and an end to labor contractualization that appeared to have already been abandoned.

We track down where are we with only two years left into his presidency.

Much of the pandemic’s impact on the economy is captured by gross domestic product (GDP), the sum of all products and services created in an economy. With the lockdowns crippling demand and shuttering businesses, economic managers are resigned to a recession as of last June, a devastation unlikely to be fully reversed throughout the year, if the central bank is to be believed.

But even before the pandemic, Duterte government’s record on economic growth already showed some weakness. Growth have continued to decelerate since 2016, and the health crisis just made it worse with a recession likely as of end-June. Poverty incidence dropped to 16.6% in 2018, nearing the government’s 14% target, but gains may have since been reversed by economic contraction, creating a formidable challenge to a government with only two years left in office.

Weakness in growth meant hardly a dent to the unemployment rate. While the government notched some historic quarterly dropped in the jobless rate (4.7% in the fourth quarter of 2016 and 4.5% in fourth quarter of 2019), the job market generally appears where it has been since 2016, with just more construction work being generated by the “Build, Build, Build” agenda. It puts into question the focus put into infrastructure as a long-term strategy to recover from a pandemic-induced economic slump.

That said, underemployment, or the number of people looking for more jobs, dropped to 13% in the four quarter of 2019, a multi-year low, before rising to 14.8% in the first quarter of 2020. Economic officials were quick to justify the recent decline in foreign direct investments, saying the pandemic left no country unscathed. What they failed to underscore was that since 2017, way before the pandemic happened, FDI has been on a sustained decline. From a record-high of $10.26 billion, FDI net inflow dropped to $7.66 billion last year. As of April, they were down 32.1% to $1.98 billion and the central bank expects to cap the year with just around $4 billion.

The decline in FDI is evident even on areas where investors are offered perks to relocate here. Investment pledges at the Philippine Economic Zone Authority are on set for their third straight year of decline this year. As of May, investments are down 31.6% year-on-year to P29.54 billion. Jobs generated by these investments have also started dipping to 1.57 million in January from 1.6 million in end-2019. 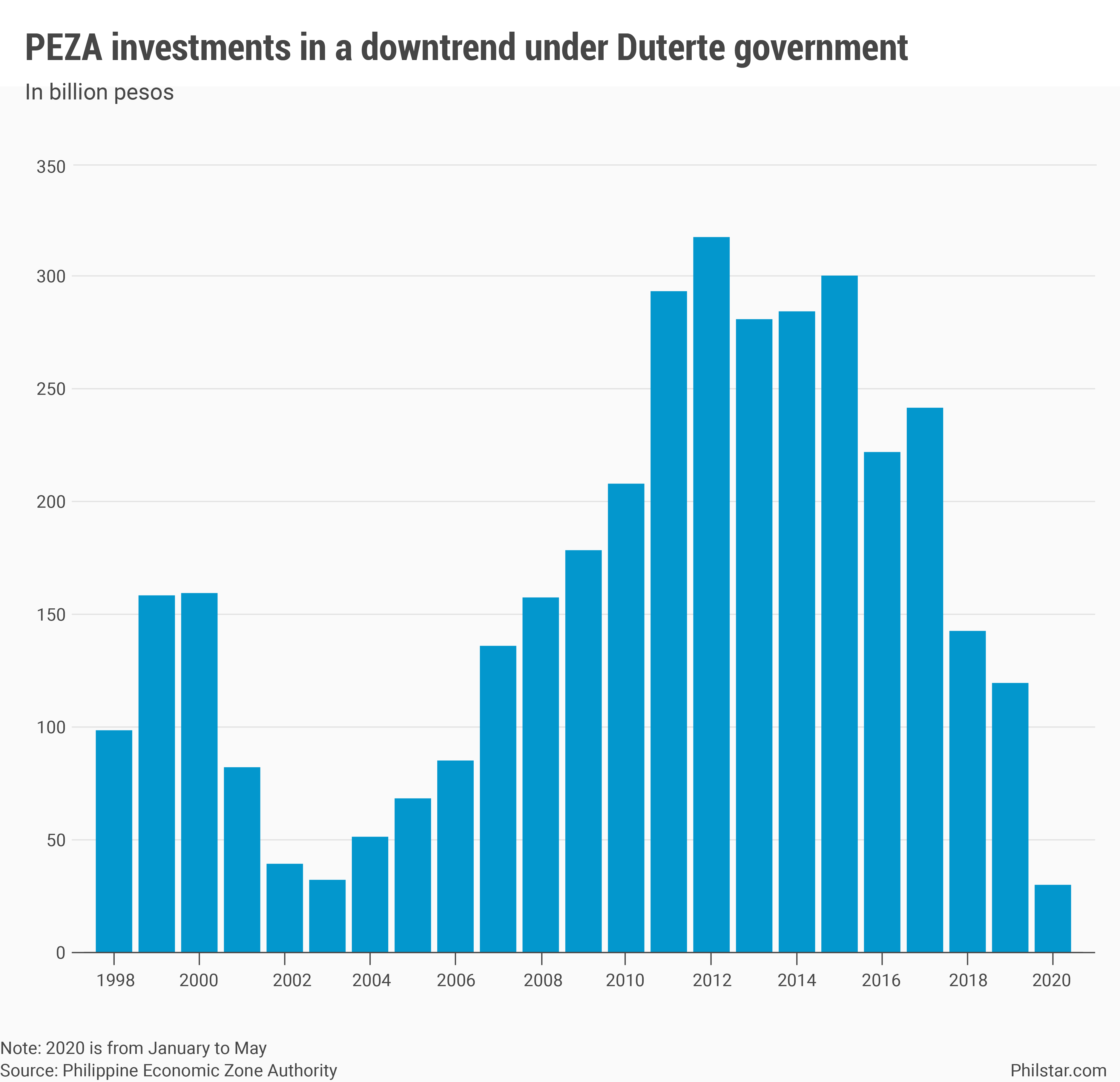 With growth unlikely this year, prices become less of a problem for the government. But this has not always been the case. In 2018, as a result of the government’s failure to import rice on time, inflation surged to a near decade-high of 5.2%. The following year, claiming to have successfully rein in high prices, economic managers highlighted the deceleration on inflation to 2%, partly as a result of high base from previous year.

As of the first half this year, inflation has become manageable at 2.5%, falling within the central bank’s 2-4% target this year. Perhaps the sector that garnered the biggest benefit of the Duterte presidency was tourism. Long characterized as a “low hanging fruit,” tourism surged since 2016 in both arrivals and revenues generated from tourist activities. In 2019, a record 8.3 million tourists visited the Philippines, contributing P482.15 billion in revenues.

Because of the pandemic however, and the travel restrictions enforced to control the spread of the virus, tourist numbers dropped 68.1% to 1.3 million as of the first half, while revenues were down 66.7% to P81.05 billion during the same period. Tourism officials say the government is shifting gears for now by strengthening local tourism.

The tourism benefits were among those highlighted by a friendlier approach to China relations. But from there, Duterte’s fondness of China hardly deliver results. Equity FDI from China remained miniscule at just $1.9 million as of April. Infrastructure pledges by Beijing increased in terms of value, but completion of actual projects has been slow. No less than former Socioeconomic Planning Secretary Ernesto Pernia said Beijing, despite yearly meetings between Philippine and Chinese officials, has been lagging behind in terms of project approval and delivery.

Instead of investments, Chinese workers grew exponentially under Duterte. Labor department data showed that from just 5,142 alien employment permits issued to Chinese workers in 2013, the number surged to 58,604 issued as of September last year. The bulk of which were for “administrative support” jobs which the agency said, capture jobs in Philippine offshore gaming operators (POGOs). The POGO industry, as congressional hearings showed, were notorious for evading taxes and hiring illegal workers. 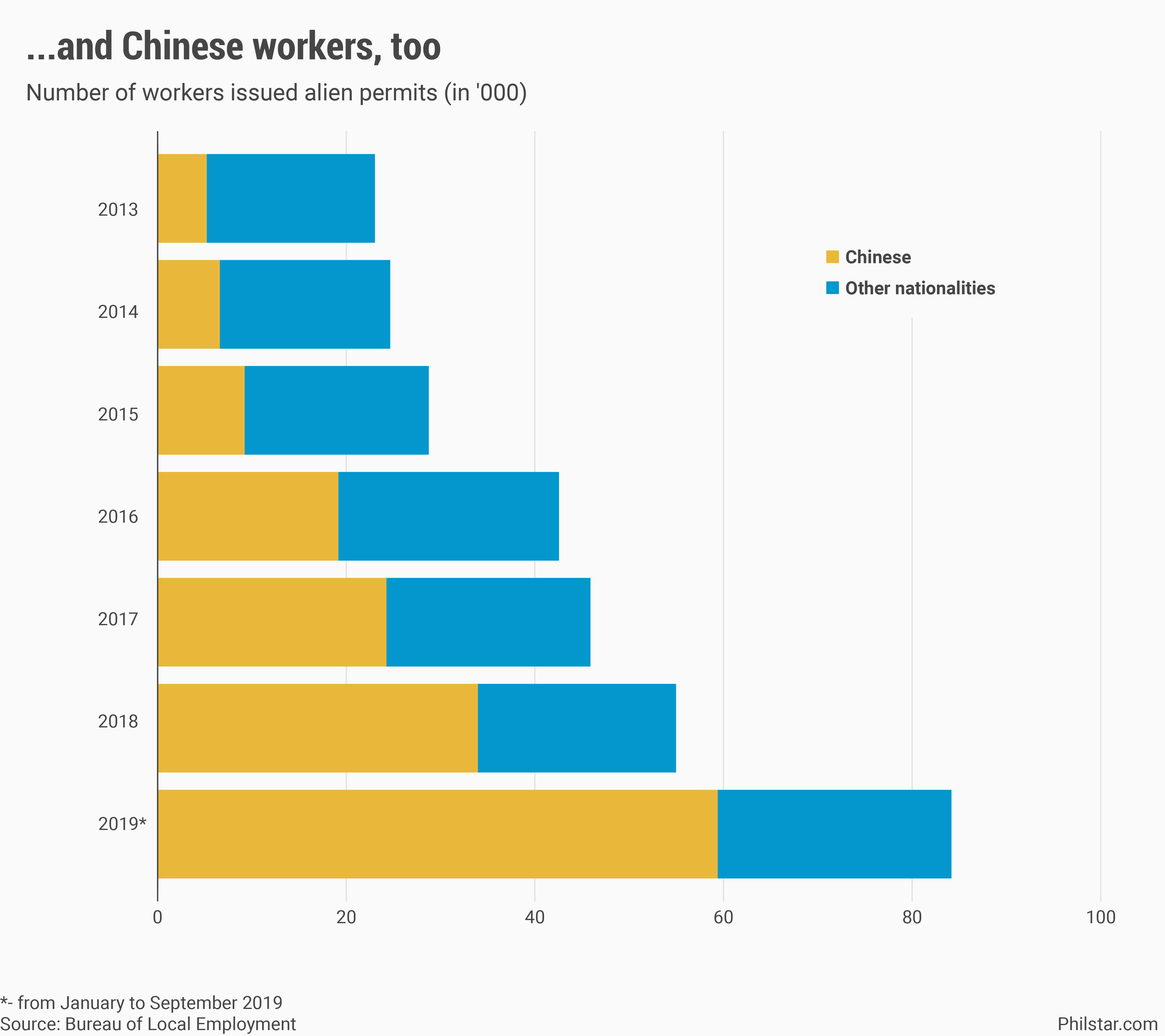 During Duterte’s term, some social policies got a boost. The Pantawid Pamilyang Pilipino was institutionalized, while other subsidies such as free public broadband, irrigation as well as college education in public universities were enacted. Universal healthcare was also passed, but the law has hardly hit ground running when the pandemic struck, exhausting health resources. Freelancer in Maine: We earned $150,000 while social distancing