On June 22, President Trump announced a suspension of processes and issuing of H1B work visas. This ban prevents foreigners from seeking employment in the United States. This is a concern for many, but especially to recent graduates from universities in the United States.

As a recent university graduate in the U.S., students have a choice to apply for an Optional Practical Training (OPT) visa to legally work in the country. Many students had left to return home by May due to the COVID-19 pandemic and decided to not use the extra time they have on their visas to stay in the U.S. Those who have stayed to make the most out of their education have a limited time of one-year to work for an employer. After one year, or three years for STEM degrees, the OPT expires and they will have to apply for an H1B visa to continue to legally work and stay in the U.S.

Sarina Santiago, 22, is currently working in New York City on her OPT visa. In order to stay and continue working in the US after this year, she will have to apply for an H1B visa. (Photo courtesy of Sarina Santiago)

“It is a huge source of stress, and a huge hurdle international students have to get through,” said Sarina Santiago, 22. Originally from the Philippines, she graduated in May from Boston University and is currently on OPT. Santiago began work in June as a Junior Strategist at Cult Health in New York City and has one year until the visa expires. In order to stay and continue working here, she will have to apply for an H1B visa.

“Not only do you need to have a company to sponsor you, but you also need to apply and then be approved of your application by the government,” she said. “It’s a lottery. It’s just bad news one after the other. As an undergraduate, you have less chance to get H1B unlike grad students because they’re priority.”

Because of how difficult the H1B work visa is to obtain, there is a joke that has been passed around. “The running joke of getting married instead,” Santiagao said. “Back then it was a joke, but now, it’s like having to take that offer seriously. I literally get stressed talking about it; I get stressed thinking about it.”

Knowing what is in store for them as international students, Santiago said she stopped using LinkedIn to apply for jobs and instead uses it as a networking tool. 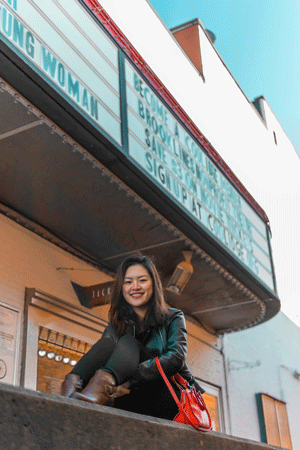 Claire Yu, 22, from Taiwan, graduated this year from Boston University with a B.A. (Photo by courtesy of Claire Yu)

Claire Yu also took a different approach when she applied for jobs. “I started relatively earlier than most people,” she said. “I started in July 2019 in the summer.”

The 22-year old Yu also graduated from Boston University and has a degree in Economics. “I knew that applying online wasn’t going to be as effective. I just used LinkedIn and cold-emailed people. I was interning full-time during last summer, and after work I would cold-email people,” she said. Currently in Boston, Yu found a job and is scheduled to begin full-time at an auditing and assurance company PwC in August this year.

“I went to the myvisas.com website, to see a list of people who will sponsor, and I saw what kind of jobs were sponsoring,” she said. “I targeted the roles for which I know they would sponsor. H1B is really hard because it’s geared mostly towards finance and engineering people.”

Elizabeth Chou, 27, graduated with a Master’s degree from Boston University. Job hunting has not been easy for her, too. “The job has to align with your major,” she said. “Like if my major was Public Relations, I can’t get this visa with a data analytics [job] position. Many firms ask ‘will you need sponsorship now or in the future?’ when I fill the application. I think H1B makes it more difficult to find a job because companies are less likely to spend money to sponsor you.”

In light of recent racial tensions and protests in addition to the suspension of H1B visas, those on OPT are faced with the reality of being barred from staying in the U.S. after the year. To those beginning their careers, more options are being taken from them. This reporter also faces the same challenges.

As a recent graduate from Boston University with a degree in both Film and Communications, it is not easy to find a job that aligns with one’s degree. Moreover, H1B sponsorship is more common in some industries and for some jobs than others.

“Yes, your citizenship is definitely hindering a lot of your job opportunities,” Santiago said. “Because, of course, the U.S. is trying to protect jobs for their own citizens.”

For recent graduates with less experience, it is even more challenging to find a job as a foreigner amidst the pandemic and racial tensions in the U.S.

“Honestly, even before he suspended this process, I’d made my mind that I wouldn’t apply for H1B and stay in the United States,” said Chou. “I will just go back to Asia as my OPT expires. In general, Trump’s administration is not friendly to international students and employees at all.”

Yu believes the announcement is part of Trump’s election campaign. “Majority of Americans don’t know about H1B visas,” she said. “The H1B visa application window for 2020 has already closed. The  majority of the visas are given to specific jobs and roles in engineering and finance. And the majority of people who are unemployed during this pandemic are people who cannot work from home.”

For this reason, suspending the H1B visa does not affect unemployment rates in the U.S. amidst the Covid-19 pandemic. “What he does to suspend the H1B visa does nothing to help the unemployed,” said Yu. “It’s all for the upcoming election because it doesn’t do anything.”

Throughout his presidency, Trump has repeatedly targeted immigrants in the country. “It’s going to be hard to dwell on this sad and discouraging news, and your motivation to find a job,” said Santiago. “We just have a lot of drive and motivation that a lot of Americans don’t have. They don’t get the hustle of international people. The fact that our citizenship is a barrier is such a huge waste of opportunity.”

Despite the challenges, some are hopeful that the current situation may change after the presidential elections in November. Santiago, Yu, and this reporter have decided to remain in the U.S. to use our OPT and see if the H1B visa ban is lifted while we are still in the country. However, Chou has decided to leave the U.S. once her OPT time expires. The pandemic has revealed the realities that many immigrants face upon entering the U.S.

“Like I said, Trump’s administration is not friendly to international students and employees,” Chu said. “Also, Trump has been very rude to the Chinese people. What he keeps saying about Chinese people makes some racists hate Chinese and Asians in general. Honestly, when you walk on the street, can you really tell this person is a Chinese, Chinese American, or Asian American? It doesn’t matter if I am a citizen or not, it doesn’t matter if I have a visa or not. What matters is my race and color. It makes me not comfortable with staying in the United States. I am afraid that the discrimination and separation will become more severe in this country.”

How contactless technology is defining the end-to-end passenger experience