As the number of daily COVID-19 infections explodes in San Antonio, inadequate resources and outdated methods of data management and communication at the Metropolitan Health District have hampered critical efforts to investigate new cases of the disease.

On Tuesday, Assistant City Manager and Interim Metro Health Director Colleen Bridger, who took the agency’s reins after Dawn Emerick announced her resignation last week, acknowledged the problems and promised some fixes were on the way.

“Part of the problem is we didn’t have an infrastructure in place to anticipate and respond to the surge that we are actually experiencing,” Bridger said hours before Mayor Ron Nirenberg announced a record-shattering 1,268 new cases of COVID-19 in Bexar County.

“The case count rose so dramatically so quickly and overwhelmed the capacity and the contact tracers,” he said.

In a sign of just how much the coronavirus has overwhelmed Metro Health, Bridger urged anyone who tests positive for COVID-19 to do their own contact tracing: call anyone who they have recently come into contact with and ask them to self-quarantine for two weeks.

“I don’t think we thought that we needed an infrastructure that would accommodate a surge that would be 10 times as big as the first one,” Bridger said. 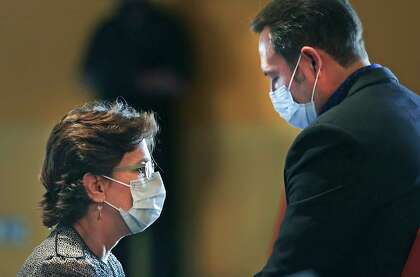 In the past month, the Trinity University professor has spent about 10 days at a South Side location volunteering as a case investigator for Metro Health. His job has been to call COVID-19 patients and determine their close contacts so that others can reach out and encourage them to self-quarantine.

Experts say the process is essential to breaking the chain of transmission of COVID-19.

Huesca would have volunteered even more of his time, but officials sent him home on at least three occasions for lack of space.

“They didn’t have a telephone,” Huesca said. “That happened about three or four times. The space is a huge problem, and it has been from the beginning. Honestly, it has taken our health department too long to address the space problem.”

Metro Health has space and resources at five locations for a total of 70 case investigators at a time, Bridger said.

That falls well short of a critical mass urged months ago by a panel of public health experts assembled by Nirenberg and Bexar County Judge Nelson Wolff. In April, the COVID-19 Health Transition Team called for at least 175 investigators to determine the contacts of those who test positive.

Bridger said that within two weeks, the number of investigators will increase to 150 as Metro Health opens a space at the Alamodome dedicated to case investigations.

Nirenberg said he was uncertain why Metro Health had not yet increased its number of investigators.

“I don’t know,” he said. “And certainly that’s something we need to do immediately. That’s a question for Metro Health. But certainly, I would say that with the acceleration of these cases, I’m not sure that 175 is enough.”

Investigators also have been slowed by a requirement that they use pen and paper to fill out forms while interviewing patients, a cumbersome process that precedes a separate data entry step. Mario Bravo, 44, another volunteer, described pulling files from boxes for each case before making calls at desks that sometimes lacked headsets.

“It’s pen and paper,” Bravo said. “And it’s extra slow because it’s not like you can take a spreadsheet with a bunch of people’s names and phone numbers. Everybody has their own individual file, and you have to keep everything separate.”

He added, “It’s a lot of time for an attempted call if somebody doesn’t answer.”

Bridger said that starting Wednesday, volunteers will be able to fill out the forms electronically.

“We’re converting them to a JotForm,” she said, “which allows people to enter the data into the form. They will still have to pull things out of boxes. But when they make the call based on the information they got from the box, they will be able to enter all of the information that patient gave them into the digitized form.”

The files used by case investigators often contain lab results. And some private labs are forced to send their results to Metro Health by fax, an antiquated process criticized last week by Councilwoman Rebecca Viagran.

“I know some clinics, they are personally taking, driving the paperwork to whichever site they need to to drop off the documentation because they’re not able to get the faxes through,” Viagran said at a council meeting.

Metro Health has increased its number of fax machines from two to four, Bridger said on Tuesday, but “clearly that is not a viable solution.”

Metro Health uses Microsoft Excel to manage its data, and investigators cannot work from home without a secure connection to prevent data breaches. Cherise Rohr-Allegrini, an epidemiologist who’s a member of the city-county health team, is troubled that volunteers cannot work remotely.

“It slows (investigations) down,” she said, “and it also requires that everybody be there in person, so you need a space, which is a huge problem in a respiratory outbreak.”

For months, public health experts have urged the agency to switch to a secure, cloud-based clinical software application called REDCap to manage its data, which would allow investigators to work remotely, Rohr-Allegrini said.

“I don’t know what the resistance was,” she said. “I do know that Emerick was in support of that at the time, that’s what she told us, ran it up the chain, and it didn’t happen. The phrase was used, ‘You can’t build the airplane when you’re flying it.’ But you’re already in the air. You’ve got to do something.”

Metro Health has contracted with the UT School of Public Health to hire up to 200 case investigators and 175 contact tracers, a process that would use REDCap and allow people to work remotely, Bridger said.

Meanwhile, Metro Health is waiting for the state to roll out a data management system called Texas Health Trace that would allow for a coordinated approach to contact tracing, as well as remote case investigations. Its implementation is delayed.

“We’ve been working with the state since the pandemic started, and they’re saying, ‘You don’t have any choice but to give us your data and put it into this newly developed system,’” Bridger said. “The state isn’t ready yet.”

Metro Health is “very keen” on using the state’s system, she added, because “we don’t have to teach people two different systems within two weeks, and we don’t have to worry about converting the data from one system to another system.”

Nirenberg is awaiting its arrival.

“The state system is running behind in the roll-out,” he said. “Trace investigation is talking on the phone mostly, so if we were able to have that capacity (for remote investigations), the ability to trace would get a whole lot easier and we could probably drastically expand the operation.”

Like other case investigators, Huesca has struggled to get patients to answer his calls. He suspects the problem is that Metro Health does not use a universal caller ID that clearly identifies the call as COVID-related.

“The caller ID is a 207-prefix,” he said. “The problem today is that if people don’t recognize a phone number on their cell phone, often time they won’t answer it.”

Huesca has made a point of calling back at least three times if a patient doesn’t pick up.

“Somebody suggested that we follow up with a text explaining who we are,” he said, “but the phones that we were using weren’t capable of sending text messages.”

“IT said they were close to making that conversion,” she said. “The challenge is we apparently have a complicated telephone system.”

As cases surge exponentially, Metro Health must meet any challenges that are hampering case investigations, said Rohr-Allegrini, the epidemiologist.

“It’s essential right now,” she said. “It’s the tool we have to stop this pandemic. Or slow it down at least. We’re not going to stop it.”

‘Talk is cheap, and time is ticking away’