The court decided by a 6-3 vote that a key provision of the Civil Rights Act of 1964 — Title VII, which bars job discrimination because of sex, among other reasons — encompasses bias against people because of their sexual orientation or gender identity.

“An employer who fires an individual for being homosexual or transgender fires that person for traits or actions it would not have questioned in members of a different sex,” Justice Neil Gorsuch wrote for the court. “Sex plays a necessary and undisguisable role in the decision, exactly what Title VII forbids.”

The Trump administration had argued that the law’s plain wording compelled a ruling for the employers. Gorsuch, a conservative appointee of President Donald Trump, concluded the opposite, and Trump said Monday that he accepted the court’s “very powerful decision.”

“This is a huge victory for LGBTQ equality,” said James Esseks of the American Civil Liberties Union. “The Supreme Court’s clarification that it’s unlawful to fire people because they’re LGBTQ is the result of decades of advocates fighting for our rights. The court has caught up to the majority of our country, which already knows that discriminating against LGBTQ people is both unfair and against the law.”

Kavanaugh wrote in a separate dissent that the court was rewriting the law to include gender identity and sexual orientation, a job that he said belongs to Congress. Still, Kavanaugh said the decision represents an “important victory achieved today by gay and lesbian Americans.”

Trump had a restrained reaction, telling reporters that he’d read the decision and that “some people were surprised.”

He added: “But they’ve ruled, and we live with their decision. That’s what it’s all about. We live with the decision of the Supreme Court. Very powerful. A very powerful decision actually. But they have so ruled.”

The outcome is expected to have a big effect on an estimated 8.1 million LGBT workers across the country because most states don’t protect them from workplace discrimination. An estimated 11.3 million LGBT people live in the U.S., according to the Williams Institute at the UCLA law school.

Gay-rights leaders say that “married on Sunday, fired on Monday” is a possibility in more than half of the United States.

Gerald Bostock, a gay county government worker from Georgia whose lawsuit was one of three the Supreme Court decided Monday, said no one should have to be “fearful of losing their job because of who they are, who they love or how they identify. And the justices have now made sure that we won’t have to worry about that.”

John Bursch, who argued the appeal from a Michigan funeral home owner against a fired transgender employee, said: “Americans must be able to rely on what the law says, and it is disappointing that a majority of the justices were unwilling to affirm that commonsense principle. Redefining ‘sex’ to mean ‘gender identity’ will create chaos and enormous unfairness for women and girls in athletics, women’s shelters, and many other contexts.”

The cases were the court’s first on LGBT rights since Justice Anthony Kennedy’s retirement and replacement by Kavanaugh. Kennedy was a voice for gay rights and the author of the landmark ruling in 2015 that made same-sex marriage legal throughout the United States. Kavanaugh generally is regarded as more conservative.

The Trump administration had changed course from the Obama administration, which supported LGBT workers in their discrimination claims under Title VII.

During the Obama years, the federal Equal Employment Opportunity Commission had changed its long-standing interpretation of civil-rights law to include discrimination against LGBT people. The law prohibits discrimination because of sex, but it has no specific protection for sexual orientation or gender identity.

Joe Biden, the presumptive Democratic presidential nominee who served as Obama’s vice president, praised the decision on Twitter as “another step in our march toward equality for all. The Supreme Court has confirmed the simple but profoundly American idea that every human being should be treated with respect.”

Efforts by Congress to change the law to explicitly bar job discrimination on the basis of sexual orientation and gender identity have so far failed.

The Supreme Court cases involved two gay men and a transgender woman who sued citing employment discrimination after they lost their jobs.

Aimee Stephens lost her job as a funeral director in the Detroit area after she revealed to her boss that she had struggled with gender most of her life and had, at long last, “decided to become the person that my mind already is.” Stephens told funeral home owner Thomas Rost that after a vacation, she would report to work wearing a conservative skirt suit or dress that Rost required for women who worked at his three funeral homes. Rost fired Stephens.

The 6th U.S. Circuit Court of Appeals in Cincinnati ruled that the firing constituted sex discrimination under federal law.

Stephens died last month. Donna Stephens, her wife of 20 years, said in a statement that she is “grateful for this victory to honor the legacy of Aimee, and to ensure people are treated fairly regardless of their sexual orientation or gender identity.”

The federal appeals court in New York ruled in favor of a gay skydiving instructor who argued that he was fired because of his sexual orientation. The full 2nd U.S. Circuit Court of Appeals ruled 10-3 that it was abandoning its earlier holding that Title VII didn’t cover sexual orientation, saying that “legal doctrine evolves.” The court held that “sexual orientation discrimination is motivated, at least in part, by sex and is thus a subset of sex discrimination.”

That ruling was a victory for the relatives of Donald Zarda, who was fired in 2010 from a skydiving job in Central Islip, N.Y., that required him to strap himself tightly to clients so they could jump in tandem from an airplane. He tried to put a woman with whom he was jumping at ease by explaining that he was gay. The school fired Zarda after the woman’s boyfriend called to complain.

Zarda died in a wingsuit accident in Switzerland in 2014.

In the case from Georgia, the federal appeals court in Atlanta ruled against Bostock, a gay employee of Clayton County, in the Atlanta suburbs. Bostock said he was fired in 2013 because he is gay. The county argues that Bostock was let go because of the results of an audit of funds he managed.

The 11th U.S. Circuit Court of Appeals dismissed Bostock’s claim in a three-page opinion that noted the court was bound by a 1979 decision that held that “discharge for homosexuality is not prohibited by Title VII.”

​​​​​Information for this article was contributed by Mark Sherman, Alex Sanz and Ed White of The Associated Press; and by Robert Barnes of The Washington Post.

FILE – In this Oct. 8, 2019, file photo, Aimee Stephens, seated center, and her wife Donna Stephens, in pink, listen during a news conference outside the Supreme Court in Washington. Aimee Stephens lost her job when she told Thomas Rost, owner of the Detroit-area R.G. and G.R. Harris Funeral Homes, that she had struggled with gender identity issues almost her whole life. The Supreme Court has ruled that a landmark civil rights law protects gay, lesbian and transgender people from discrimination in employment. It’s a resounding victory for LGBT rights from a conservative court. Laverne Cox, the award-winning transgender actress and longtime trans rights activist, listens at left. (AP Photo/Susan Walsh, File) 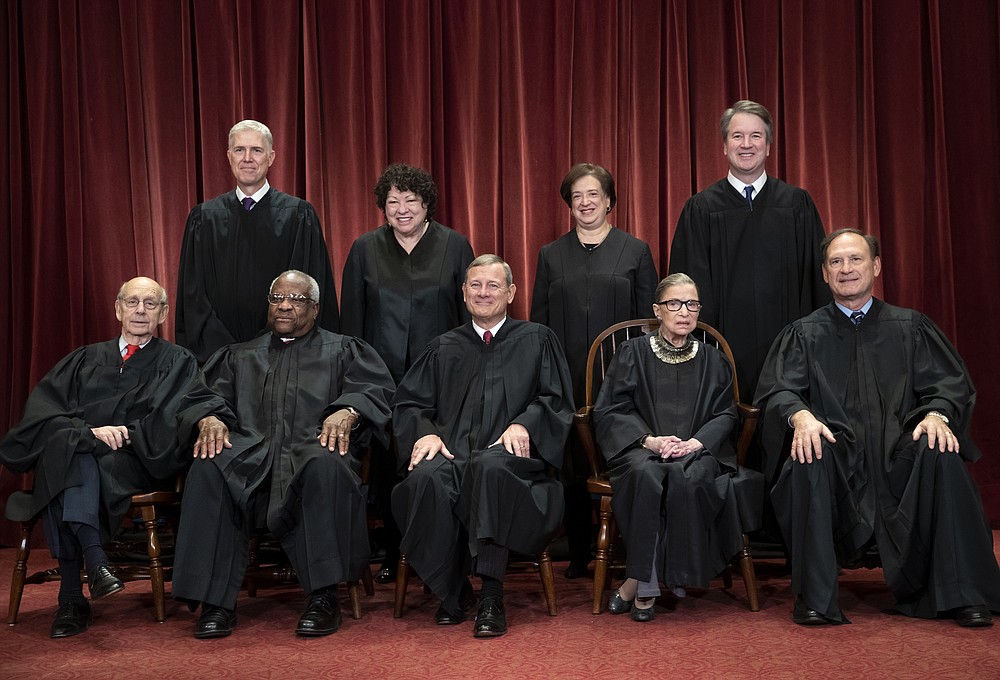 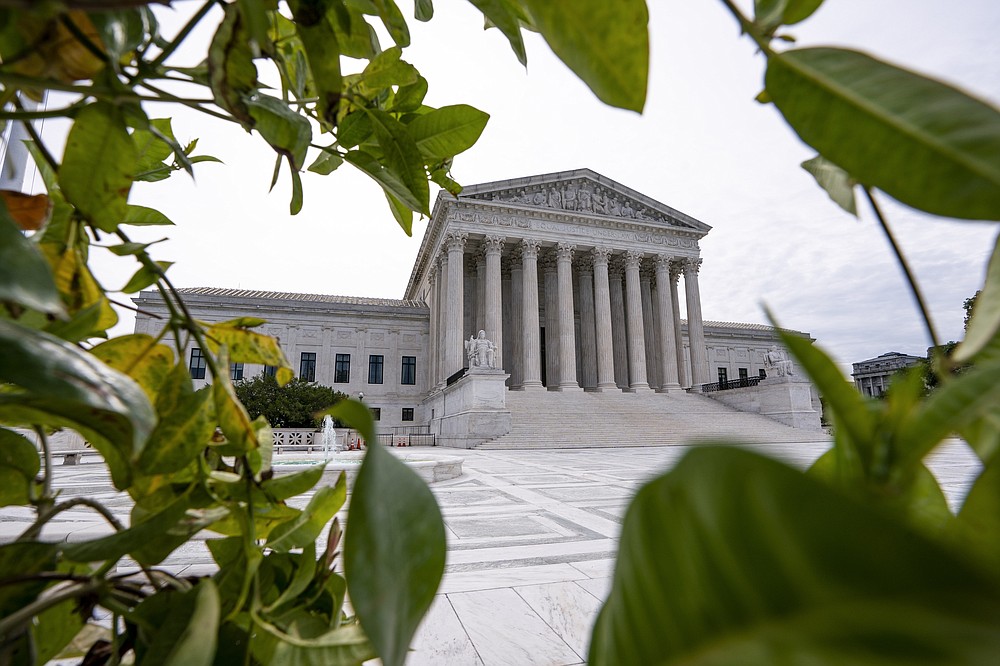 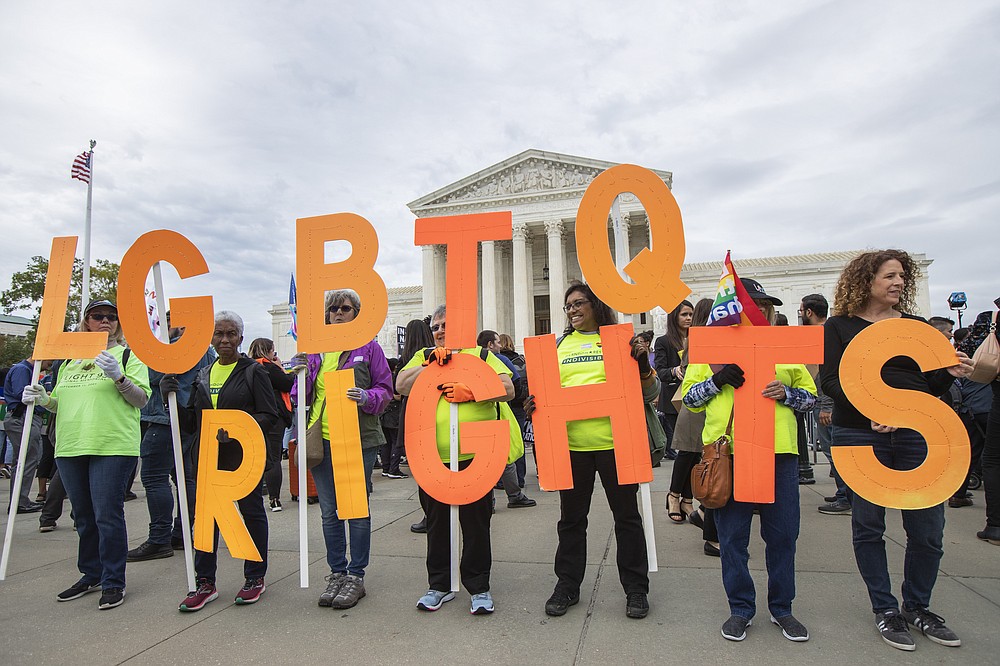 FILE – In this Oct. 8, 2019, file photo, supporters of LGBTQ rights hold placards in front of the U.S. Supreme Court in Washington. The Supreme Court has ruled that a landmark civil rights law protects gay, lesbian and transgender people from discrimination in employment. It’s a resounding victory for LGBT rights from a conservative court. (AP Photo/Manuel Balce Ceneta, File) 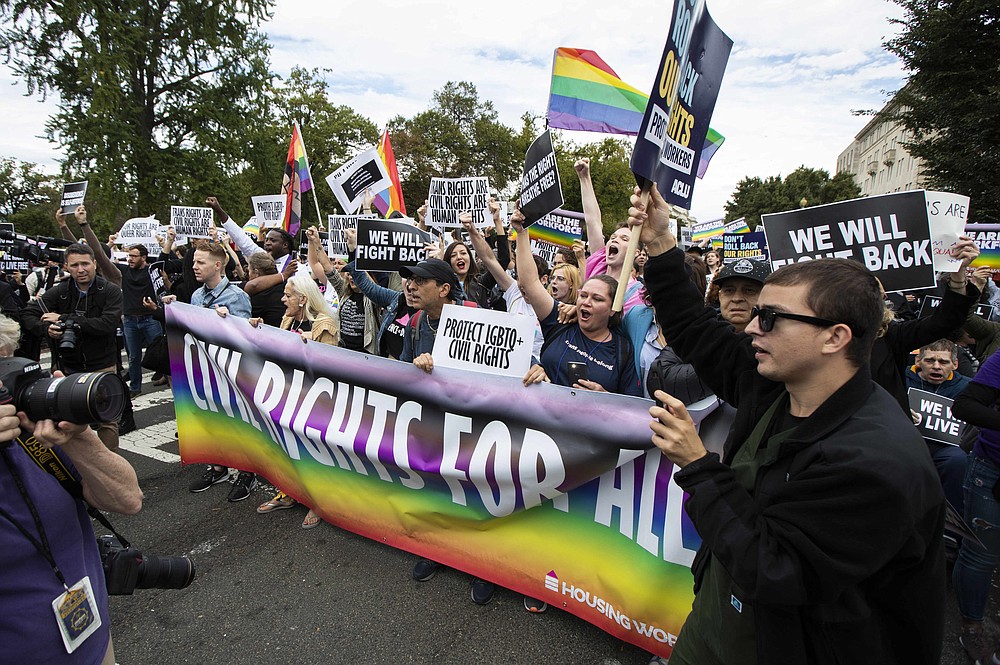 FILE – In this Oct. 8, 2019 file photo, supporters of LGBT rights stage a protest on the street in front of the U.S. Supreme Court in Washington. The Supreme Court has ruled that a landmark civil rights law protects gay, lesbian and transgender people from discrimination in employment. It’s a resounding victory for LGBT rights from a conservative court. (AP Photo/Manuel Balce Ceneta, File) 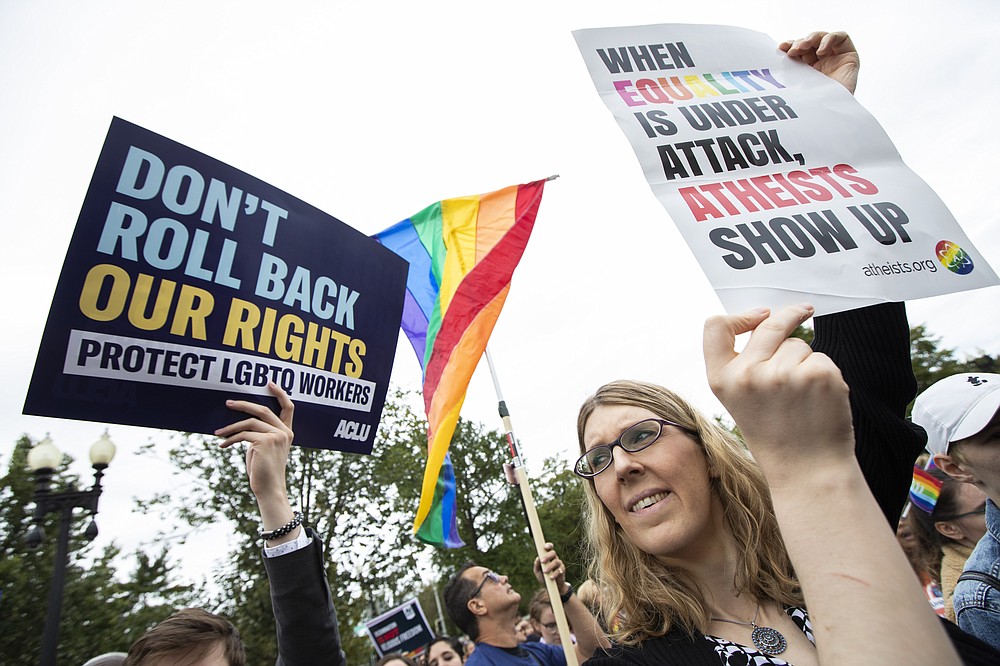 18 Women Who Used Technology To Amplify A Movement